There's just something about fall that gets me much more motivated to produce satisfying and creative meals for my family. Well, it's probably not just the season but also all the wonderful ideas I see on Pinterest. My family benefits from this of course and we have found some new dishes to love.
First, I decided on a whim at the grocery store one day that we all really ought to try couscous. I had seen it many times before on various cooking shows but had never tried it. I had all three kids help me make it (this always seems to make them want to try new foods better) with butter and a little salt. I loved it - so yummy and easy - and was shocked to see my will-only-eat-cereal-or-crackers kid wolf it down.
Then I saw this recipe posted by a friend on Facebook and decided that its Mexican flavors certainly sounded appealing to this preggo lady. These taco chicken bowls simmer in the slow cooker all day and are fantastic. The Nerd raved about it and told me that I would definitely need to make more for the freezer for when baby comes. The kids were a little hesitant to try it, but we will bring them around!
While purchasing my couscous that crazy day at the grocery, I also bought a bottle of 7-up because I had seen the recipe for those 7-up biscuits over and over again. Posters raved that they were the best biscuits they had ever tasted - so I figured they were worth a try. Only a certain hubby of mine and his children decided to drink the 7-up, but I caught them in time to save enough for the biscuits. And oh. my. word. "Best biscuits ever" does not even begin to describe these delectable creations. As the Nerd ate his, his eyes widened and he emphatically stated that this was the only way I was to make biscuits ever again. Yes, they are THAT good. 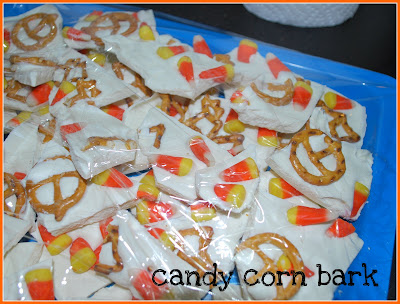 And finally, the Beast wanted me to make something for his class on Halloween. Normally I would have made adorable cupcakes or cookies, but I had no energy for such creativity. So we made this candy corn bark instead. It's super easy - you just melt a bunch of white candy melts, pour them into a wax-paper-covered pan, and sprinkle the melted candy with candy corn and pretzels. When it hardens, you simply break into pieces and serve. Well, that is, until you get to school and find out that they no longer accept homemade goodies for parties and birthdays. Oh well, we just waited until after class to hand them out.
Now I'm hungry for lunch!
Posted by Mrs. Frogster at 10:28 AM