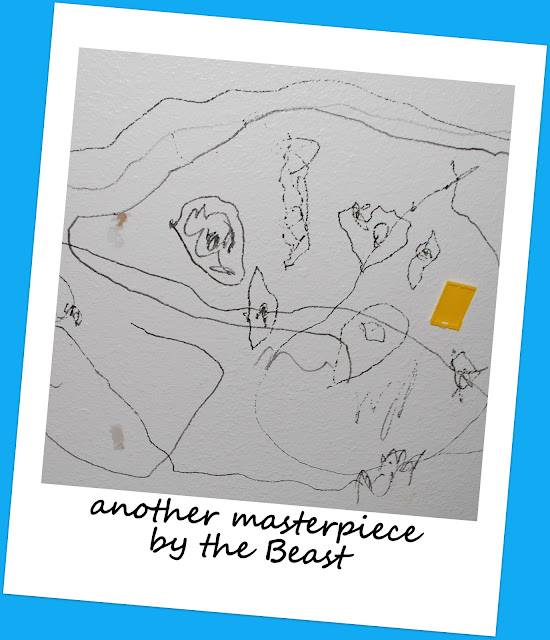 A couple of weeks ago, I was having a very stressful day.  The Spud was pushing every boundary and being pretty obnoxious.  Simple chores were taking three times as long as usual to complete as the Drama Queen sighed and groaned her way through homeschool that morning.  The Beast had already been disciplined twice that day for getting into things he shouldn't have.  Then, right before I packed up all the kids and their stuff to take them to Grandma's for the night (oh glorious day!) I went downstairs and discovered this masterpiece spanning the entire wall in the kids' room.  I turned and saw that the same artist had drawn on every door, every cabinet, the toilet, the shower, the laundry room furniture, and every wall in between.

I freaked out.  I said a lot of angry words, demanded to know where the instrument of destruction was, was annoyed that yet another thing had disrupted my day.  I looked at the magnitude of the mess, thought of the fact that we rent, not own this place, and panicked.  When the Beast confessed that he had been the one wielding the marker, I lit into him, reminding him that this was not our house and that we take care of things in the house and that this was going to take forever to clean up.  He found the marker for me, and to my great relief, I saw that it was a dry-erase marker and not a
Sharpie, as I had originally thought.  I muttered loudly to myself that "this was the last straw" and "you better feel grateful that I'm still letting you go to Grandma's today."

Later on, I got out a bucket of soapy water and a sponge and started scrubbing.  It quickly became apparent that although the marker was not permanent, it was going to take a lot of time and elbow grease to clean it up.  I spent a good two hours on it, making little headway down the wall.  I worked on it the next day and tried to have the kids help me.  Now, two weeks later, there are still marks on the wall.  Although they are faded, they are certainly still visible, reminders of what transpired that day, reminders that a mom lost control and said angry and hurtful things.

It's been two weeks, but those words have not been erased or forgotten.  Yes, they have faded somewhat in the midst of the "I love you"s and the bedtime stories and the hugs and the kisses.  Still, the thoughtless words and negative reactions have left an indelible print in my child.  The faded marks on the wall stand as a solemn reminder of how much influence my words have on my children.

I still haven't figured out how to get it all off the wall.  Even my "magic eraser" has failed me this time.  Most likely we will have to paint over it.  In like fashion, I have had to "paint over" my lack of kindness and self-control with the Beast by asking his forgiveness and asking God to forgive me as well.  Colossians 4:6 tells me to "Let your speech be alway with grace, seasoned with salt, that ye may know how ye ought to answer every man."

I am not a perfect mom and never will be.  But I can tell you this - those marked-up walls have served as an admonition to me to watch my words and my attitude as I work with my children every day.
Posted by Mrs. Frogster at 8:55 AM