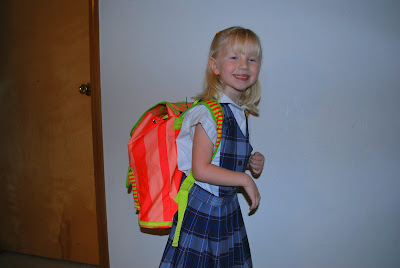 Last night, I uttered words that have never been spoken in this house before - "She needs to get to bed. It's a 'school night.' "
Yes, things have certainly changed around here. It all started on Tuesday morning, when I got up early to get everybody and everything ready for the first day of school.
The Drama Queen was already up, excited and ready to go in her uniform and with her special backpack, packed to the brim with tissues, Clorox wipes, construction paper, and other such preschool necessities. I had my bag packed as well, with my lesson plan book, red pens, paper, and some special treats for my Spanish students. When the boys woke up rather groggily, the Beast pulled out his new Spiderman backpack to be filled with extra clothes and pull-ups for daycare and later his ESD preschool. We managed to remember everything and get out the door in plenty of time to get to school. 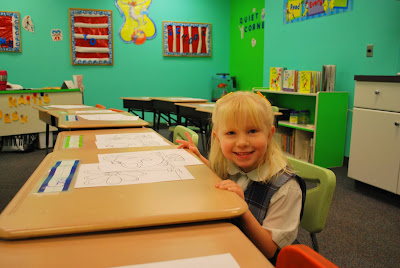 The Nerd planned to go into work a little late that morning so he could see our baby girl go to school that first day. After dropping the boys off at daycare (not a happy occasion for the Beast unfortunately), we took the Drama Queen up to her classroom where she willingly posed by her desk in her Dr. Seuss-themed room. That sweet smile and air of self-confidence tugged at my heart a little, but I didn't cry. The Nerd insisted on taking several pictures of the momentous event, including photos of her in front of the fish tank, in front of Mrs. Kaiti's desk, in the process of unloading her backpack, etc. You would think he was the blogger in the family! I gave her a quick hug and told her she was going to be awesome in preschool; then I hurried downstairs to teacher's meeting. After a long but informative assembly, I got to meet the the 7th and 8th grade students that would be in my Spanish class this year. (lots of boys with deep voices that squeak every once in a while and a few girls that are taller than the boys :) ) It felt great to get back into the teaching groove again!
After Spanish class, I picked up the boys from daycare and headed home. I got a few things done around the house and then it was back to school to pick up a very bubbly and talkative Drama Queen from school. She chatted about what she had learned and who had gotten their name on the board (apparently not a good thing) and who was sitting next to her all the way home. We all hurriedly ate lunch and then got back into the van to take Davey to his ESD preschool for the afternoon. 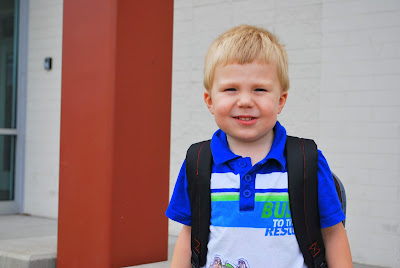 This time, as I pulled into the parking lot of the ESD/Headstart building and signed in to take him to his class, I started to cry. It was very overwhelming to take my barely-three-year-old to a class with a teacher I hardly knew. He looked at me uncertainly from the door, but as soon as Mr. Scott promised he could wash his hands with the bubbly soap, he cheerfully waved and went inside. I didn't want to leave and stood around for a little while, as if there were something else I should do before I go. Mr. Scott gently reminded me that he would see us again at 3:30 pm. I reluctantly took the other kiddies home for the rest of the afternoon.
Promptly at 3:30 I was back at his school, waiting to hear all about his first day. Mr. Scott said he did very well for his first day and only had a little trouble staying focused during circle time. Davey of course said nothing - he never talks about his day. From his preschool, I drove straight to the doctor's office, where the Drama Queen and the Spud had their check-ups and respective shots. Then it was home to finish making dinner and finally take a break from the van!
So, yes, I would say that our daily lives have changed rather dramatically. I am trying to figure out where my Etsy shop projects and blogging will fit in, but I am loving it! This is the part of motherhood I have been waiting for - the busyness, the school projects, and the daily schedule :)
Posted by Mrs. Frogster at 8:45 AM