Smile for the Camera

Ever since we brought Little Sprout home from the hospital, the struggles with the Beast have significantly increased. More meltdowns, more "off" days, and an increased sensitivity to everything have become a part of our daily routine. In addition to dealing with all of that, I now have a baby that is waking several times a night as well as an almost-five-year-old that is not sleeping well at night. In fact, some nights the kid does not sleep ALL. NIGHT. LONG. And let me tell you, an autistic kid that hasn't slept all night plus a mom who therefore has also not slept all night is not a good combination.
It is certainly stressful and hard as we try to help the Beast navigate this new part of life. It always helps to have a sense of humor along the way. A few weeks ago, our Beast was having one of his sleepless nights. The Nerd and I were trying to tune out his noisy chatter over the monitor so that at least one of us could sleep. Suddenly our bedroom door flew open, and there stood the Beast in full Spiderman attire holding his biggest Nerf gun: 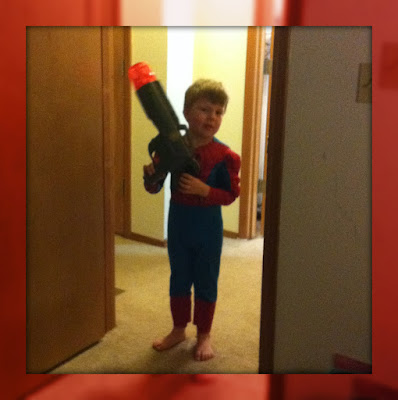 In a deep voice, he commanded: "Smile for the camera!" After recovering from the near-heart-attack I had when the door opened so suddenly, I just started laughing. Laughing until tears came and the Nerd joined in.
Yes, I was extremely tired the next day. I had so much to do and so little energy for it. But somehow, the whole day seemed better after our encounter with Spiderman the night before.
P.S. It looks like I need to start shopping for a bigger Spiderman costume!
Posted by Mrs. Frogster at 8:15 AM