(if you missed the first part of our exciting journey, click here to catch up!) 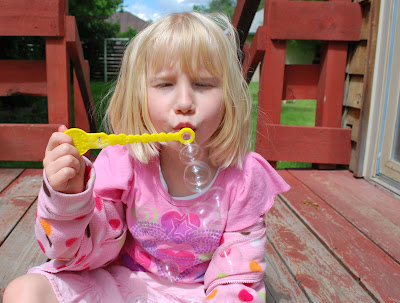 After we visited the world-famous Carhenge (and bought a bumper sticker to put on our cooler to indeed prove that we had been there), we settled in to some fun days in Alliance. The kidlets spent lots of time in Grammy and Pop's backyard, blowing bubbles, chasing each other with squirt guns, and running through the sprinkler. I explored the town with my mom - you could walk everywhere! We hit up the local thrift stores and scored some major goodies - did I mention I bought all of Little Sprout's crib bedding there for $2.00?! 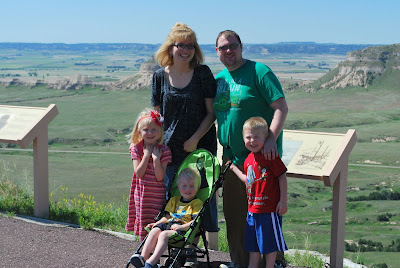 On Wednesday of that week, we headed out to Scott's Bluff for some sightseeing. This was a landmark for the pioneers that traveled the Oregon Trail (yeah, we sort of did the Oregon Trail thing backwards). We hiked around while I tried not to panic about the kids getting too close to the edge and toppling over. 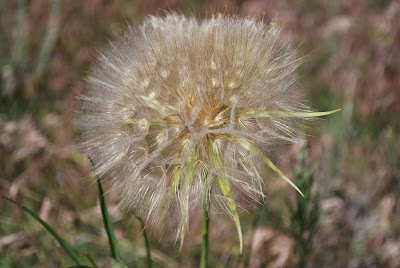 I did manage to get some decent shots of the beautiful scenery though. The Beast was on the lookout for snakes, although much to the Nerd's disappointment, we never saw a rattlesnake despite all the warning signs. The Drama Queen freaked out about "fire ants" and clung to Grammy's hand the whole time. 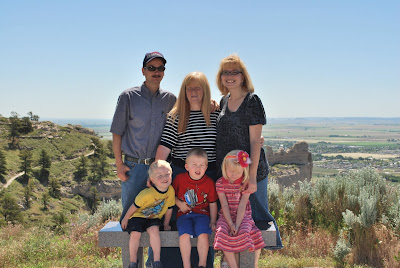 It was a beautiful view. Later, we descended the bluff and discovered a small, somewhat decrepit natural history museum. Apparently admission was discounted on Wednesdays; so we went in and viewed the many animals that had been positioned in interesting ways by the taxidermist. For its size, the museum actually housed a lot of animals. 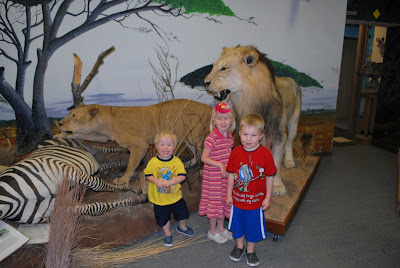 Naturally the kids chose to pose by the lions that had just viciously killed a zebra. It wasn't the goriest scene there, either. 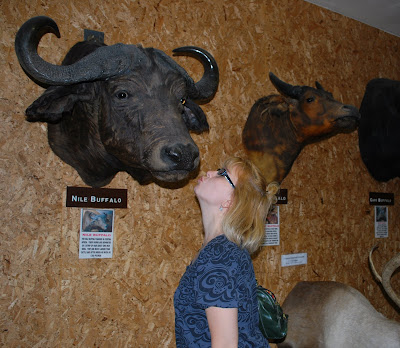 Everybody wants a water buffalo, right? The various mounted heads on particle board gave the place a certain vibe. The kids loved it! The town of Scottsbluff also had a Culvers, which made this pregnant lady quite ecstatic. (I made sure to stop there twice while we were there, so as to get as much frozen custard as possible.) 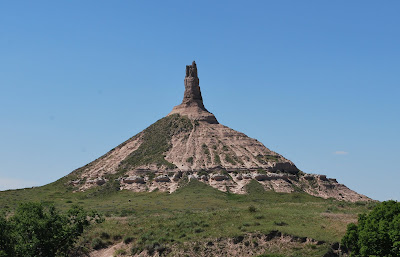 Then we all piled into the van and drove on to see Chimney Rock. This was also a landmark on the Oregon Trail and was so named because well, someone thought it looked like a chimney. I really don't know how those pioneers ever made it to Oregon. It was a 1,200 mile drive for us from Oregon to Chimney Rock, and we took two days driving 75 miles an hour in an air-conditioned minivan. 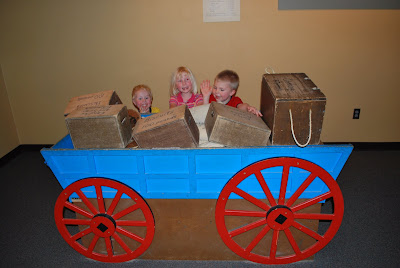 The kids enjoyed the Chimney Rock museum, which I personally thought was a total rip-off in regards to the amount of money we had to spend. However, if you like lifting lots of heavy objects and pretending to fill a pioneer wagon, you might feel that you got your money's worth. And obviously, my kids enjoyed that part very much. It was a lot like cleaning up the toys after a busy day, only this time the kids actually picked up the toys without complaining or procrastinating. Wow. Maybe I need to make the toy box look like a big pioneer wagon. 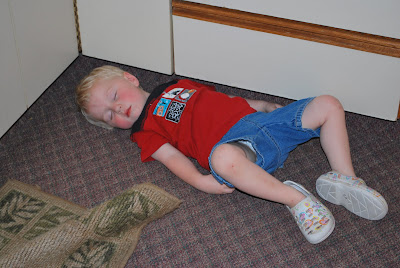 Besides our Oregon Trail adventures, we got to visit the pastor's home for a cookout. The kids were also able to enjoy the many playgrounds there in Alliance. Poor Spud was pretty wiped out by the end of our stay in Nebraska. He fell asleep on the kitchen floor right after he asked Grammy for some cheese balls and was out for quite some time. 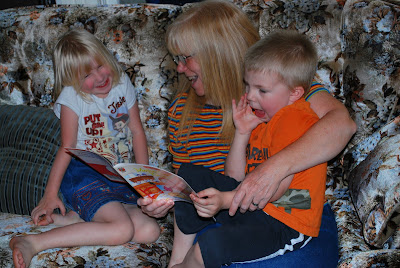 The kids enjoyed one more snuggle with Grammy while she read nursery rhymes to them in silly voices. I love this picture - I think it is one of my favorites from the trip. All too soon, we were saying a tearful goodbye and loading up the van at 9:00 pm that Thursday to continue on our journey, this time to Indiana.
And the adventure shall continue - in another post, that is.
Posted by Mrs. Frogster at 8:13 PM