The Saga Begins: Oregon to Nebraska

The Nerd and I stayed up late on Thursday night (June 16), packing and repacking the van and trying to make sure that nothing was forgotten. Thankfully the Nerd has awesome Tetris skills, thus allowing us to include extra pillows and blankets for the kids as well as a giant cooler full of drinks. Tucked here and there were boxes of granola bars, potato chips, pretzels, and fruit snacks; and a "lunch box" awaited with a loaf of bread and a jar of peanut butter. We were set for the adventure of a lifetime! Or something like that. 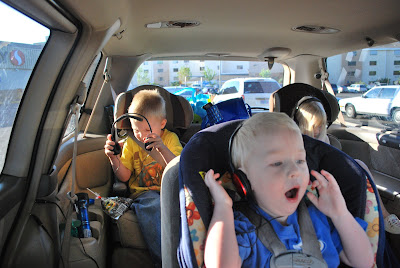 Early the next morning we loaded up the kids and made sure all the headphones worked. Grandpa had made special road trip bags for each of the kids, and the boys immediately got busy with their glow sticks, flashlights, and toy cars. The Drama Queen attached herself to her DS and we pretty much didn't hear from her for the rest of the day. :) The Nerd had purchased a new updated GPS system, which after hearing her annoying and precise voice, we promptly named "Glados." (Portal fans, you will recognize this name right away; or perhaps you are like me - not at all a fan but still subjected to the voice for hours at a time as your husband saves the world, one portal at a time. ) Glados took us through eastern Oregon, much of Idaho, and then Utah. 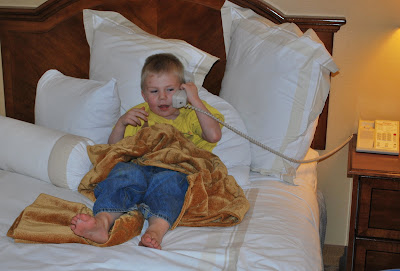 We stopped in Ogden, Utah for the night at a nice hotel. And by nice, I mean that we arrived there at 10:00 pm to find the entrance closed off with police tape. "Don't worry," the receptionist reassured us. "We just have to use the back entrance right now because there is a hostage situation in a nearby hotel." Oh, good, and there I was, needlessly worrying about the safety of my family when the gunman was NEXT DOOR. We finally got into our room, where a certain little man felt he needed some room service. Try a granola bar, kiddo. No eggs benedict and $7 packages of candy for you, mister! 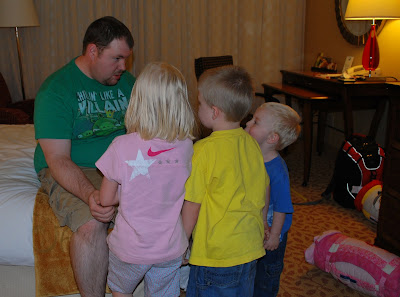 Realizing that our troupe of sometimes-not-so-well-behaved children was largely inexperienced in the matters of hotel stays, the Nerd gathered them in for a short meeting on the do's and don'ts of hotel life. Together we learned important lessons such as "don't get up in the middle of the night and make yourself a pot of coffee" (I was seriously bummed on that one!) and "don't shut your brother in the closet and then laugh hysterically." We offered the kids one of the beds, but all three ended up sleeping in various locations in their bed rolls. I think the Beast ended up in the desk chair - that kid's idea of comfort is bizarre at best. Although our bed was large and very comfortable, I didn't sleep a wink all night because I kept imagining our autistic child waking suddenly and just walking right out of the hotel room. 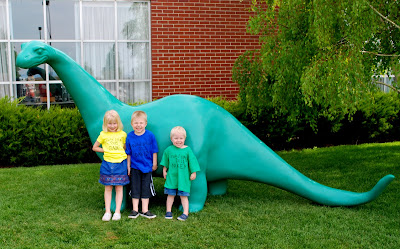 The next morning, we tried to pretend that granola bars are an awesome breakfast and that hotels do indeed have good coffee. Then we loaded up the kids and continued our trek across America. Amazingly up to this point there had been minimal to no complaining from the offspring, and only once had someone dared ask, "Are we there yet?" We spent most of the day driving through Wyoming, although Glados insisted on taking us on a scenic but completely unnecessary detour in Utah. The kids' favorite rest stop was Little America, which, if you believed all the hype on the dozens of billboards leading up to it, should have had its own theme park. However, we were still thankful for the very clean restrooms, the playground for little legs to stretch, and the few interesting things to examine. I posed the crew in front of the Sinclair dinosaur, and why yes, I did make them matching road trip T-shirts to wear. (sometimes I am annoyingly creative like that - Nerd's words, not mine). 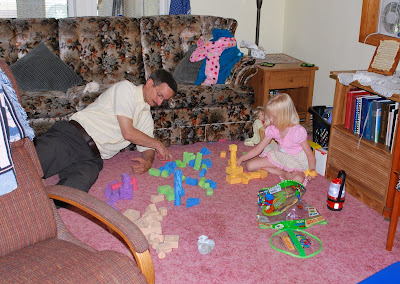 Finally, we reached our first destination - Alliance, Nebraska. This town boasts a population of 8,500 people, a lighted fountain, a bizarre attraction known as Carhenge, and most importantly, my parents. :) We attended their small church with them the next day, and after a wonderful church meal of fried chicken and sides, the Nerd and I felt the two long days of driving hit us hard. I believe we spent much of that afternoon dozing off while the kiddos played with their Grammy and Pop. That evening, feeling much revived, we headed off with the family to see the main attraction. 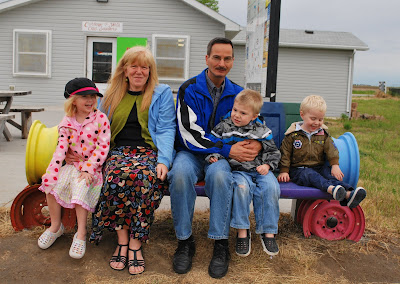 Carhenge is a large structure made entirely out of thirty-eight vehicles positioned to look like the famous Stonehenge. Apparently it was built by an artist and his family in 1987, and since then, many more car art pieces have been added to the property, including these colorful benches made of car parts. 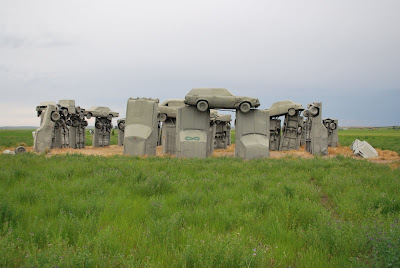 And here it is, for your viewing pleasure - Carhenge! It was certainly an experience to walk around and view all the vehicles perched at odd angles and spray-painted various colors. 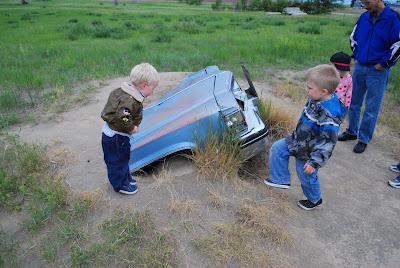 The boys were most notably impressed with a car that had been almost completely buried in the ground. Yeah, it doesn't take much for us. 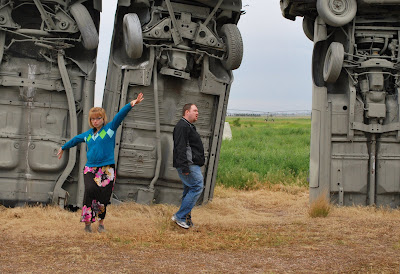 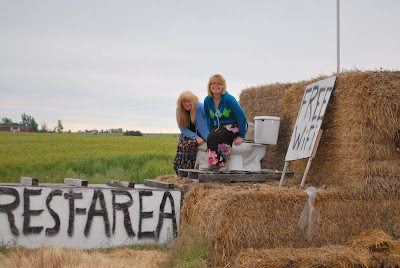 After taking a lot of pictures and being a little crazy at Carhenge, we drove a little further down the road to experience the local rest stop. It was really quite the place, with free WiFi (provided by a toilet paper tube) and immaculate toilet fixtures. Well, if you count hundreds of mushrooms and indescribable stains immaculate. I tried to get the Nerd to go up there for a photo shoot, but obviously it was decided that the preggo lady and her mom would climb on the treacherously damp hay stacks, all for memory's sake.
This post is getting WAY too long, so I shall reserve the rest of our trip for future posts. And, rest assured, it only gets more exciting from here...