How to Have a Pirate Party - ASD style

It is our family tradition to have a big birthday party every other year.  It works out nicely for us - this year the Beast and Little Sprout will have birthday parties, and next year the Drama Queen and the Spud will have their birthday parties, and so on.  The Beast chose pirates as the theme for his party and was extremely excited to have his friends come over to his house.  Because of his autism and sensory issues, in the past he has not handled birthday parties so well, especially those at loud and overcrowded places (think Chuck E. Cheese, for example).  So I decided to host a party for him and his friends at our house - a place where we could control the environment, the noise level, etc. 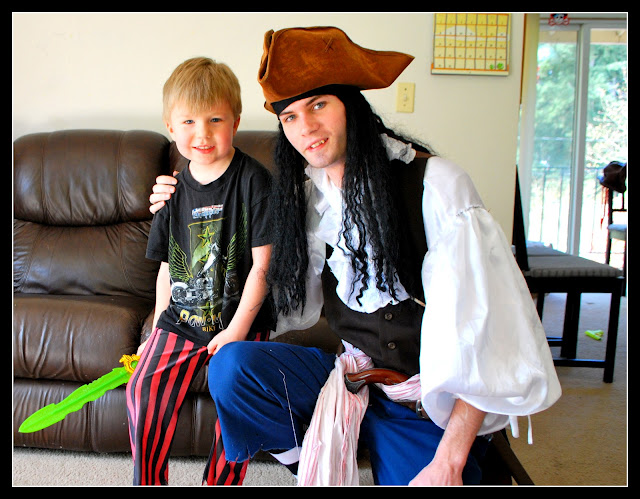 The first thing I did was hire a "real pirate" to come to the party. :)  Cap'n Blownapart is a college student at our church who had been to clown school and had a passion for all things piratey; so I knew the Beast would be comfortable with him there. 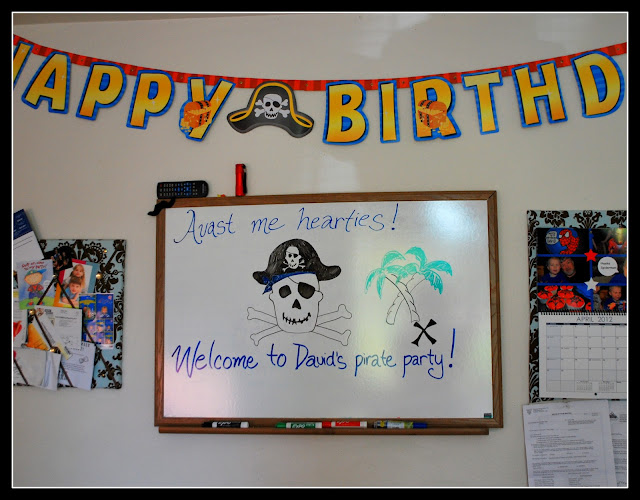 I kept the decorations pretty simple.  I drew a welcome sign on our whiteboard, mostly because I knew he would get a kick out of seeing his own name.  The Happy Birthday banner was from Dollar Tree, as were a few other decorations and party supplies. 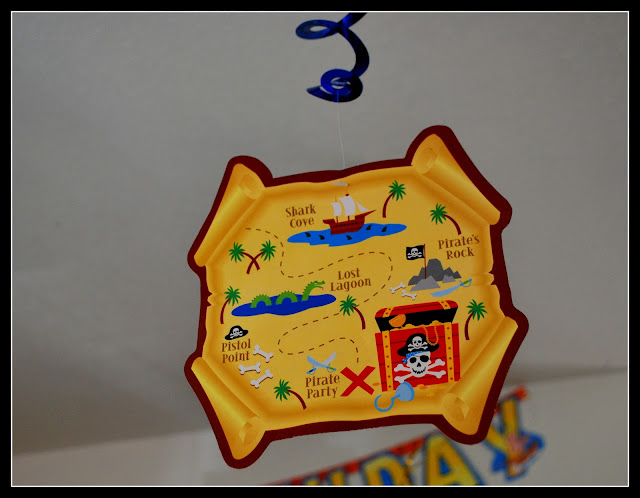 I also found these super cute pirate decorations to hang from the ceiling at Party City.  Decorations hanging from the ceiling are great - they add a lot of color and punch but are not too distracting or overstimulating for him and his friends.  I talked to the Beast before his party so we could plan what to do in case he got too overwhelmed.  He decided that he would go downstairs to his room if things got to be too much.  During the party, he only disappeared to his room once, and he quickly came back out to join his friends. 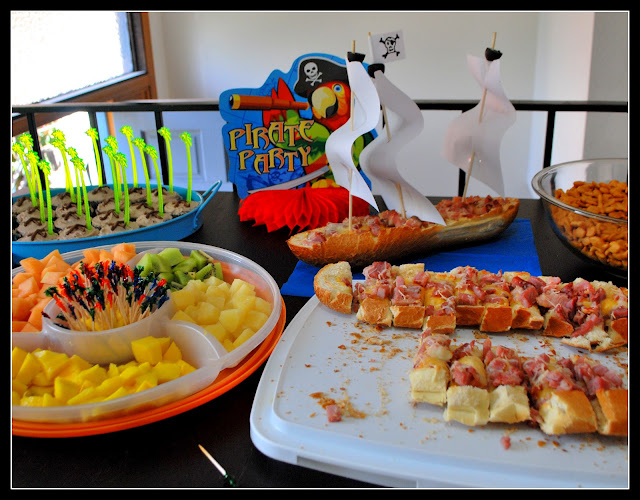 Planning the party food took some thought.  As a family, we started the Feingold Diet last week, meaning no artificial food colors, no artificial flavors, no preservatives, and the elimination of some salicylic foods, such as apples, oranges, tomatoes, grapes, etc.  I ended up making chocolate cupcakes from scratch and decorated them to look like little treasure islands.  The palm trees were plastic drink stirrers from the dollar store.  The main dishes were ham'n'cheese pirate boats, and the side dishes were a fruit tray of mango, cantaloupe, pineapple, and kiwi, and a bowl of organic cheese fish snacks.  The fruit, especially the mango, was the biggest hit! 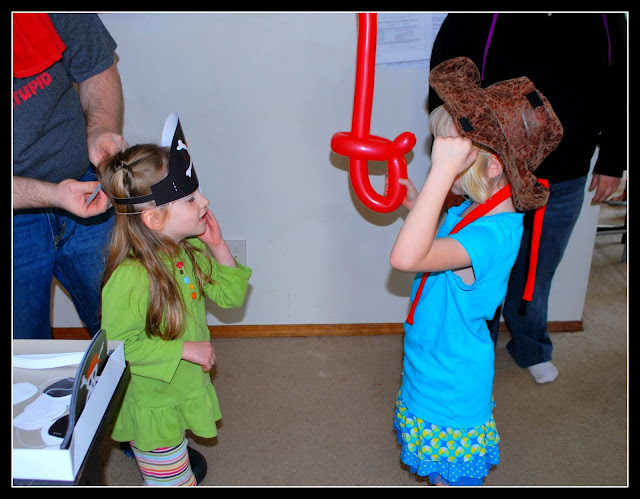 When party guests arrived, they got fitted for a paper pirate hat and matching eyepatch.  I used the free printable here.  Cap'n Blownapart made balloon swords and other balloon creatures for every pirate in attendance. 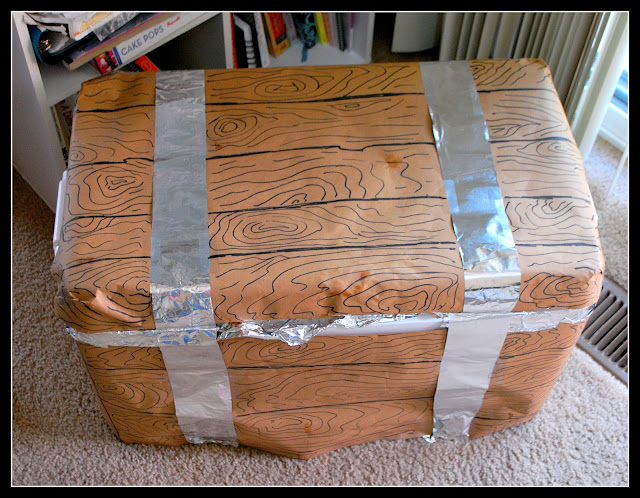 I covered our cooler with brown paper and foil to make it look like a treasure chest and filled it with "pirate water."  (The Nerd designed and printed out treasure map water bottle labels that we put on each water bottle.  The kids used a Sharpie to write their name on their bottle, and presto! everyone had their own drink that was portable and somewhat spill-proof.) 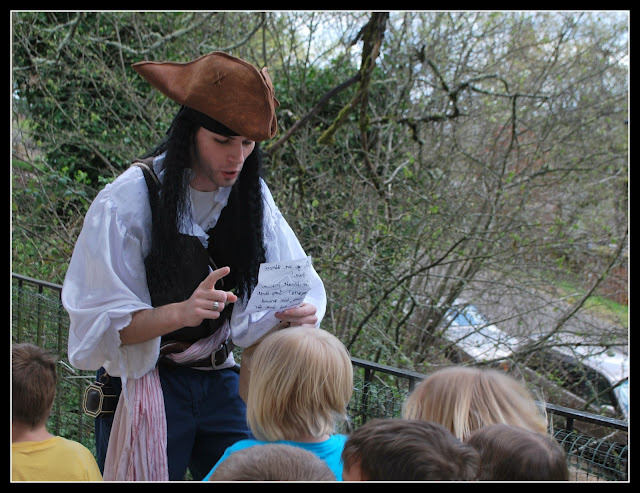 I hid "booty" for the kids to find in five different locations in the house.  Cap'n Blownapart helped the kids read the scavenger hunt clues, and then off they scattered to search for their treasure.  Prizes found were fish whistles, little plastic spyglasses, and lots of plastic gold coins.  The attending pirates filled their treasure bags and then got to take them home for a goody bag. 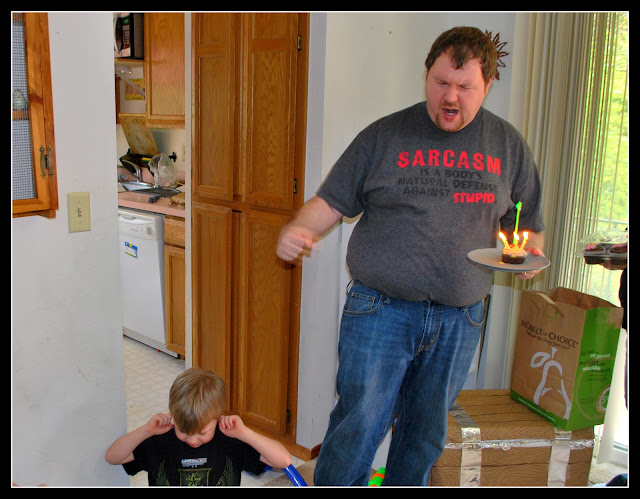 In true form, the Beast insisted everyone sing Happy Birthday to him and then plugged his ears as we did so.  By that time, he had had just about enough.  The kids sat on the floor and munched on cupcakes while he opened his gifts.  With each gift, he said, "Shiver me timbers! Thank ye very much!"  I have no idea where he got that line, but it was super cute.
The kids left with their armloads of balloon swords and booty bags, and the Beast stimmed for an hour.  It was worth it though to see him so excited and so proud to have his friends at his house.  I think we found the right balance of excitement and calm for him so that he could really enjoy his day.