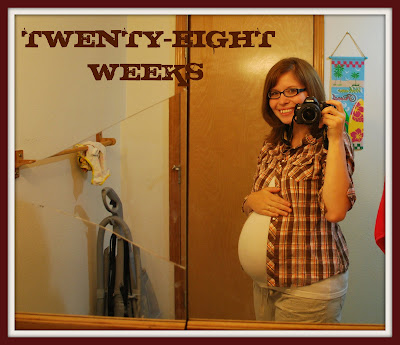 The Baby: Little Sprout has been supremely active lately. Last night the Nerd was watching in amazement as my belly suddenly sprouted mini-mountains due to the little ninja's fists or feet or elbows or who knows what. "What does that feel like?" he wanted to know. I don't know - like a crazy little alien inside of you is punching your guts out? Maybe like that. Anyway, since she is a walloping 2 1/4 pounds now and measuring up to a Chinese cabbage in weight, she certainly is bulking up for her journey outside the womb in just a couple of months. Her mother is also bulking up, due to the advent of candy corn and pumpkin spice lattes.
Me: I now claim a kinship to one of the seven dwarves - Sleepy! I feel as if everything I do these days wears me out. Yesterday I needed a nap so desperately that I bribed the kids with candy corn and some Tom and Jerry with instructions to keep it down and don't get into anything while Momma naps for a few minutes. It didn't work - the Drama Queen and the Beast kept filing in and out of my room to tell me what the Spud was doing. Today I managed to get a twenty-minute-nap in during "recess" which helped tremendously later in the whole haul-the-crew-to-the-library-for-story-time event. I am relieved that the weather has cooled down significantly, enough that I am not turning our bedroom into an ice cube trying to stay comfortable. The Nerd is thankful as well - I have noted that he has not had to pull out the extra quilts in the past few nights.
The Siblings: The Drama Queen loves to point out to each and every person we meet that "Momma is having a baby soon - that's why she's so fat and tired." It seems that the boys don't think about it that much - except at prayer time, when they all clamor to be the one to pray for the baby.
The Plans: Last week I purchased what we enjoy referring to as "amazing grace." (pacifiers) I also did some research on breast pumps and checked out some local stores for their pricing on these. We took advantage of the Babys R Us Great Trade-In Event, in which you can trade in any used car seat, stroller, crib, or other baby equipment and get 25% off your purchase of a new one. The only stroller we had was this old, dirty, cheap umbrella stroller that we had been using to corral the Spud when we went on day trips like the zoo or the mall. I'm pretty sure we only paid $12 for that thing brand-new. By trading it in however (sippy cup stains and all!) we were able to save $20 on the purchase of the Graco LiteRider Stroller in Pippin. It is by far the nicest stroller we have ever owned - all our other children rode around in Craigslist finds that worked well for us then. However, this one has cupholders. Awesomeness. And it folds and unfolds literally with one flick of the wrist. Also awesomeness. It has a large basket underneath for everything that can drop down so the baby won't be disturbed when you're getting out the diaper bag or purse. The Nerd likes that it rides on a suspension system, and I am pleased that our infant car seat can snap right into it, if we need to do so. And it doesn't hurt that the stroller is done up in an adorable green and brown elephant theme. :)
I finally remembered to take pictures of the bibs I made for Little Sprout using scraps of material from Great-Grandma: 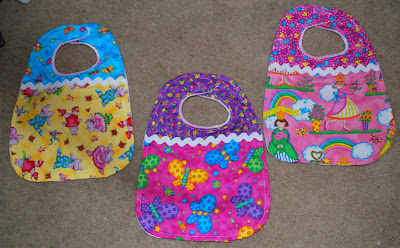 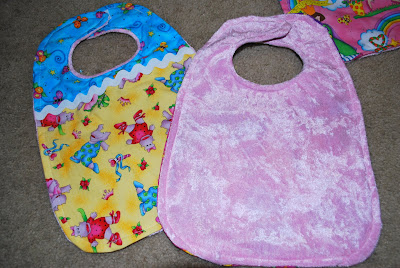 Aren't they cute? I adore oversized ric rac! I used a soft fuzzy pink fabric that I found on clearance on the back of the bibs - they are reversible. The pattern was super easy to follow and you can find the tutorial right here.
And it's on to the third trimester!
Posted by Mrs. Frogster at 3:25 PM