I woke up this morning to sunlight streaming through our tiny bedroom window. It was a glorious sight indeed, as sunshine has been a little scarce around here, oh, just the last SIX MONTHS or so! The joke that Oregonians have to buy a new pair of sunglasses every year because it's been so long since they've worn them last is particularly true this year. :) 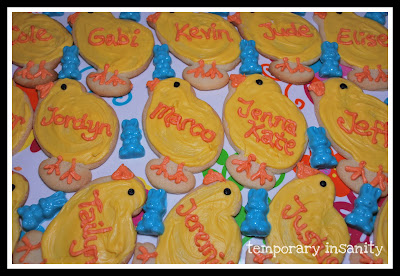 Sunshine was also present on the dining room table, where a tray of bright chickie cookies and little blue bunny candies waited to be taken to the Drama Queen's class. 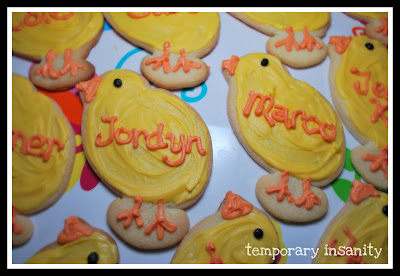 I rejoiced in the sunny smile on my daughter's face when she came out of her room this morning to discover what Momma had made for her class. 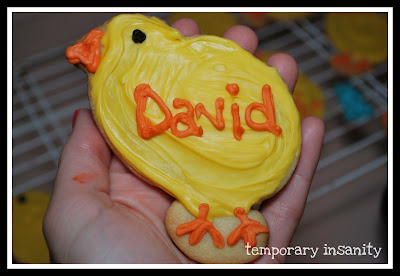 Everyone's spirits were high as Momma allowed each of the offspring to have a sugary treat for breakfast - personalized, no less. (shh, don't tell the pediatrician!) The grand moods continued as I loaded the kids into the van and drove the Drama Queen to school with the windows open. The boys wiggled in their seats in anticipation of a day that could finally be spent outdoors.
The trees outside our front window are abundant in vibrant blooms; the daffodils our neighbor planted in great faith are finally poking their brilliant heads toward the sky. A cheerful robin quickly peruses the backyard in search of the perfect worm. It is spring! These sunny scenes around me remind me of what we will be celebrating on Sunday - the fact that Jesus, the Son of God, rose from the dead and gave us the opportunity at a glorious new life with Him! Gladness and songs of praise fill my heart as I ponder these things.
But. Today, commonly referred to as Good Friday, was not full of sunshine or new life so many years ago. Today I think about my Savior suffering for me, being scourged by Pilate, denied by his disciples, mocked by the people, tortured on the cross, and surrounded by common thieves. Yes, I know the wonderful ending to this story, and I am thankful beyond words for it. However, I know that too often I forget the agony and suffering my Savior went through on that day. I pass over it to celebrate the grandeur of his resurrection and neglect to acknowledge the darkness and terribleness of the crucifixion. Today, despite the joyful sunshine outside, I choose to remember. My heart is heavy with the things He endured for me.
Matthew 27:26-54
[26] Then released he Barabbas unto them: and when he had scourged Jesus, he delivered him to be crucified.
[27] Then the soldiers of the governor took Jesus into the common hall, and gathered unto him the whole band of soldiers.
[28] And they stripped him, and put on him a scarlet robe.
[29] And when they had platted a crown of thorns, they put it upon his head, and a reed in his right hand: and they bowed the knee before him, and mocked him, saying, Hail, King of the Jews!
[30] And they spit upon him, and took the reed, and smote him on the head.
[31] And after that they had mocked him, they took the robe off from him, and put his own raiment on him, and led him away to crucify him.
[32] And as they came out, they found a man of Cyrene, Simon by name: him they compelled to bear his cross.
[33] And when they were come unto a place called Golgotha, that is to say, a place of a skull,
[34] They gave him vinegar to drink mingled with gall: and when he had tasted thereof, he would not drink.
[35] And they crucified him, and parted his garments, casting lots: that it might be fulfilled which was spoken by the prophet, They parted my garments among them, and upon my vesture did they cast lots.
[36] And sitting down they watched him there;
[37] And set up over his head his accusation written, THIS IS JESUS THE KING OF THE JEWS.
[38] Then were there two thieves crucified with him, one on the right hand, and another on the left.
[39] And they that passed by reviled him, wagging their heads,
[40] And saying, Thou that destroyest the temple, and buildest it in three days, save thyself. If thou be the Son of God, come down from the cross.
[41] Likewise also the chief priests mocking him, with the scribes and elders, said,
[42] He saved others; himself he cannot save. If he be the King of Israel, let him now come down from the cross, and we will believe him.
[43] He trusted in God; let him deliver him now, if he will have him: for he said, I am the Son of God.
[44] The thieves also, which were crucified with him, cast the same in his teeth.
[45] Now from the sixth hour there was darkness over all the land unto the ninth hour.
[46] And about the ninth hour Jesus cried with a loud voice, saying, Eli, Eli, lama sabachthani? that is to say, My God, my God, why hast thou forsaken me?
[47] Some of them that stood there, when they heard that, said, This man calleth for Elias.
[48] And straightway one of them ran, and took a sponge, and filled it with vinegar, and put it on a reed, and gave him to drink.
[49] The rest said, Let be, let us see whether Elias will come to save him.
[50] Jesus, when he had cried again with a loud voice, yielded up the ghost.
[51] And, behold, the veil of the temple was rent in twain from the top to the bottom; and the earth did quake, and the rocks rent;
[52] And the graves were opened; and many bodies of the saints which slept arose,
[53] And came out of the graves after his resurrection, and went into the holy city, and appeared unto many.
[54] Now when the centurion, and they that were with him, watching Jesus, saw the earthquake, and those things that were done, they feared greatly, saying, Truly this was the Son of God.
Let us never forget!
Posted by Mrs. Frogster at 9:11 AM