Lately, the small fry of the house have been all about those jolly round orange harbingers of autumn. The Spud and the Beast in particular will shriek "Puuumpkins! Puuumpkins!" whenever they see the colorful gourds. Adding to the pumpkin frenzy, a local store has put up a giant inflatable smiling pumpkin. Whenever we pass it, I think the only thing holding the boys back from launching out the window and giving it a big hug are those 5-point harnesses on their car seats. :)
So, it was with no small amount of excitement and joy that we headed out to the local pumpkin patch last week. The sun managed to poke its head out for one day here in rainy Oregon, and we took full advantage. When we first arrived, I realized that the eagerness of the kiddos would not be contained for long; therefore like any good mother I forced each child to pose and smile graciously at the camera before outfits got ruined or meltdowns ensued. 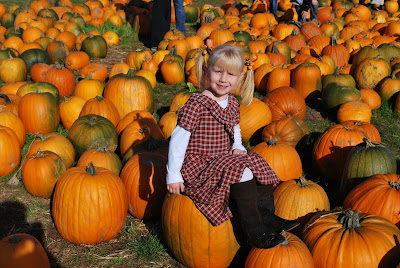 The Drama Queen did a beautiful job of course - showing off her new fall boots. 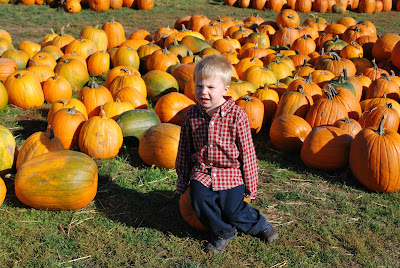 I was just thankful to get the Beast to sit for a second. He was a little overwhelmed by all the activity. 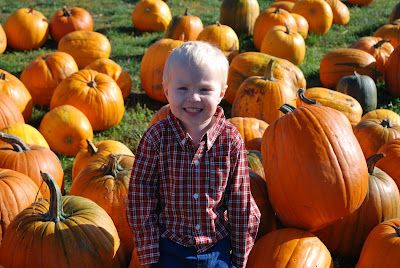 The Spud lent me one of his famous charming smiles before running pell-mell throughout the farm. 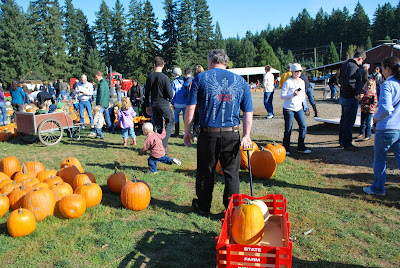 Seriously, that kid barely stopped for a second. It took him forever to decide on a pumpkin because he couldn't stay still long enough to choose. Grandpa had the fun job of keeping track of the Spud. :) 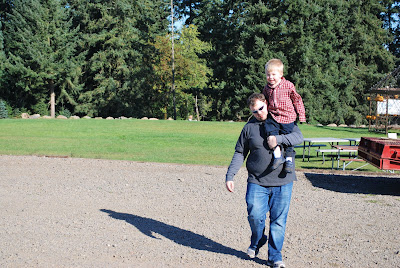 Meanwhile, the Beast saw his chance to make a break for it and gave Daddy quite the workout during the chase. I was the photographer; so I left the heavy work to the guys while I snapped some photos like this one: 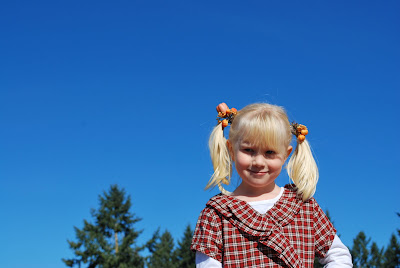 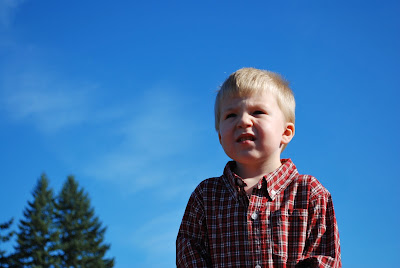 One of the reasons we like Lee Farms so much is that they sell some killer warm cider donuts! The promise of these tasty treats was enough to get all three hooligans on the straw at the same time, finally providing an opportunity to get a photo of them all in their matching outfits: 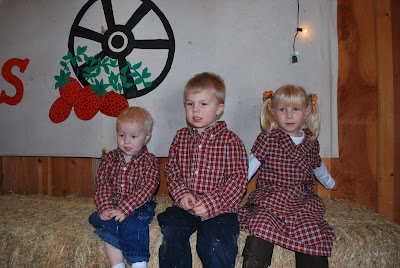 Well, we tried, anyway. The outfits will be reappearing in a future family photo shoot, so no worries. The kiddos wolfed down their donuts and begged to go in the hay maze/tube slide. I was more than willing to allow them to work off their sugary donut rush. 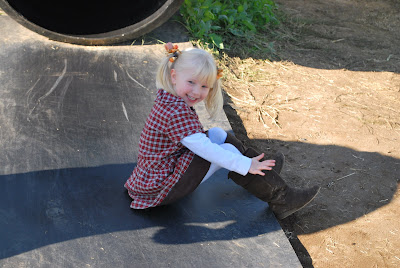 Somehow the Drama Queen managed to end her slide in a perfect pose. :) 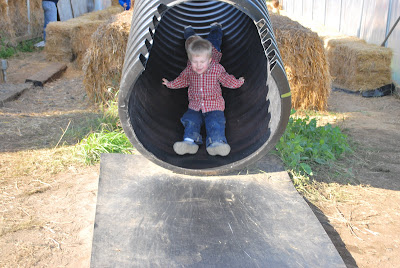 And if you are wondering if the Beast suddenly grew an extra pair of legs, that is not the case. It is merely the Spud forgetting to wait his turn and literally coming down right on top of his brother.
We ended our pumpkin patch trip with a very large and perfectly round pumpkin (the Beast's); a tall and skinny pumpkin (the Spud's); and a squat white pumpkin (the Drama Queen's).
We still had plenty of pumpkin fun coming up though: pumpkin carving with the kids, a pumpkin party with our Sunday School class, and pumpkin bowling. But that's another story for another time...
Posted by Mrs. Frogster at 1:40 PM