Life Will Never Be Normal Again 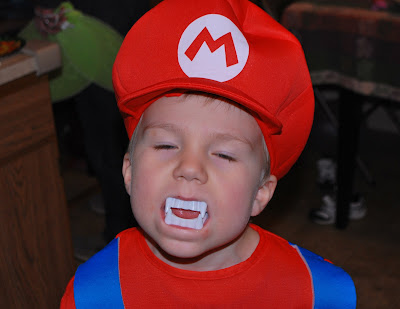 There are some rare days that I forget that I have a child with autism.  Things go well; communication with my little man is clear, and life is "normal."  On those days, my stress level goes way down; and I even catch myself occasionally fantasizing that this could be the norm for us.  Maybe he could "improve" this much on a daily basis, making life easier both physically and emotionally for us all.

Most days, there are constant reminders of the differences between the Beast and his siblings.  I may instruct the children to pick up their toys off the living room floor and put them away.  My 6-year-old and 4-year-old can do this with little reminder or trouble; but with the Beast (he's five), I must constantly remind him of the task at hand.  As in, "Davey, please pick up the toys.  Here, pick up this blue car.  Look at my face, baby, so I know you're paying attention.  What are we doing again?  No, you may not put your Spiderman costume on right now.  Focus, David.  Pick up the blue car.  Good job!  No, no, no, don't put it back on the floor!  Pick it up and put it in the toy box.  Baby, do you hear me?  You need to pick up that blue car and put it away.  Okay, fine, grab the red car.  But put it in the toy box. "  This ordeal can last forever, or at least until the Drama Queen gets tired of it and does the majority of the clean-up herself.  And then there are the changes in schedule that throw him off and require detailed explanations that never seem to be enough.  And don't even get me started on the emotional outbursts...

And every once in a while, we have a day in which I am reminded all too well of this world of autism and the inability to escape from it.  Sunday was one such day.  He woke up giggling and talking to himself, which I will admit is very cute but not at all conducive to eating breakfast and getting ready for church.  By church time, he had started sinking further and further into his own little world, making communication very difficult.  The day continued with all kinds of fun activities, including spinning on the floor, kicking me repeatedly, talking very loudly off-topic, and torrents of tears at the most inane things.  At the church's Thanksgiving fellowship dinner that evening, he was so overstimulated and who-knows-what-else that I had to physically restrain him at the table.  I have bruises on my legs from his kicking and stimming.  By bedtime, he and I were both exhausted.  I made sure to follow through on a normal bedtime routine, but the boy was too wound up to sleep.  He kept getting up out of bed and walking around the house, muttering to himself.  A few times, he came to me and began talking to me earnestly.  I had no idea what he was talking about.  He finally fell asleep sometime after midnight.

Maybe, just maybe, I worry too much.  But it's hard sometimes - I get choked up just thinking about some of the challenges he will face as he gets older.  The stimming and the emotional outbursts were not as noticeable when he was three - in fact, he mostly blended in with all the other three-year-olds that were still figuring out what was socially acceptable behavior.  Now, at age five, we get more than just raised eyebrows at the "tantrums" and repetitive, loud talking.  A few weeks ago, one of his peers came up to me and asked me why he was being so weird.  What will it be like for him in a few more years?

It's hard not to dwell on these things sometimes, especially after a day like that.  Those are the nights I cling to the comforting words in Matthew 6.  Taking my thoughts off tomorrow and focusing on seeking after Him always boost my spirits and my optimism for the future.

And today?  I was folding some laundry when suddenly the Beast was standing next to me.  He reached out and hugged me tightly.  "Hugs mean 'I love you'," he told me importantly.  I squeezed him close, blinking back tears. "I love you too, buddy."
Posted by Mrs. Frogster at 12:19 AM