You Ought to Know 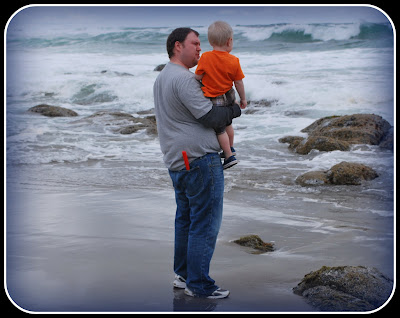 (love this man)
Today I'd like to take a moment to just brag a bit on my man. He is, after all, an amazing man and goes above and beyond his duties as husband and daddy all the time.
Take Sunday, for example. It was about an hour before we had to leave for church. I was running around as usual, making sure the three littles had on the appropriate, clean attire, feeding them a somewhat decent breakfast, and keeping them entertained until it was time to leave. I made a quick stop in the kitchen to preheat the oven for baking cinnamon rolls (my turn to bring something for Sunday School) before heading to the bathroom to do the Drama Queen's hair. It wasn't long before I realized that I could smell smoke - and it wasn't from the curling iron! I ran to the kitchen and found everything hidden in black smoke. I quickly turned off the oven, threw open a window, and opened the oven door, slamming it shut when I saw the flames shooting out. Like any good wife, I panicked and ran downstairs to get my husband out of the shower so he could put out the fire. He hurried upstairs with the fire extinguisher and rapidly took care of the offending flames. Apparently, one of our young offspring (I'm placing all my bets on the Beast) had at some point earlier in the morning put a plastic shovel deep inside the oven. At least, that's what we think it was.
Chris surveyed the damage. The oven needed a desperate and deep cleaning. Everything in the kitchen was covered in black soot or extinguisher foam. The air reeked of burning plastic - so bad that I could not handle it for more than a few seconds before gagging and getting out of there. Also, there was no way that the cinnamon rolls were even going to be a remote possibility that morning.
My man volunteered to stay home from church and clean up the mess - it was definitely something that couldn't wait. So while I carted the three littles off to church, stopping at the store on the way to pick up a few coffeecakes, he donned his face mask and protective gloves and began the tedious task of cleaning the kitchen. A few hours later, when the kids and I returned from the morning service, he still was not done. He ushered us back out of the house with instructions to "hit up a MickeyD's with a playland" for a couple more hours until he had the house completely fume-free. I enjoyed french fries and a hot fudge sundae (happiness for this preggo lady!) while watching the kids run around and play.
We came back about 3:00 pm that afternoon, bringing a hot meal for my hard-working man of course. My kitchen was spotless! He had had to wash every pan in the cabinets underneath and around the stove. He had cleaned all the appliances out on the counters and every dish that was stored in the space above the cabinets. Somehow he got the inside and outside of my oven sparkling clean as well as the windows and kitchen floor. Poor tired man! At that point, all he wanted to do was take a bath and go to sleep - but he had promised the Drama Queen that he would teach her to play War that day. So he did! By the time she figured out the game and had eagerly played several rounds with him, it was time to get back to the church for the school's graduation ceremony. It would have been so good for him to skip it and just get to bed, but he was the sound man for the ceremony and had to be there. So he did. I am so amazed and blessed by his fortitude and work ethic!
Not to mention - on Saturday while I was away doing girlie stuff with the Drama Queen, he made himself a "Honey-Do" list and accomplished quite a bit of it - fixing the dresser in the boys' room, vacuuming the entire house, reorganizing all the kids' toys, etc. Sigh. I could get used to this.
Let's just say - Father's Day is going to be a BIG deal around here this year! :)
Posted by Mrs. Frogster at 5:30 PM