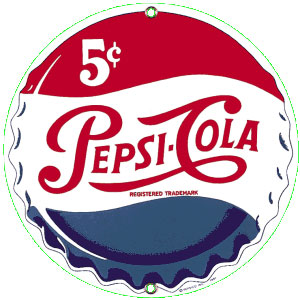 Pepsi-Cola and I have had a long-standing relationship.  We've had our ups and downs, to be sure.  I think I mentioned Pepsi and York peppermint patties as my favorite "snack" in my high school yearbook. (yikes!)  I have had my phases of trying to "quit" Pepsi.  Probably the longest we have ever been separated was about three months after I promised my dentist I would kick the soda habit to the curb.  Yet, every time I have found myself returning to my feel-good drink of choice.

I'm sure it comes as no surprise to you that there is no place for Pepsi on the Feingold diet.  With ingredients like high fructose corn syrup, phosphoric acid, and "natural flavors", it doesn't belong on any diet.  Still, I will be the first to admit that the Nerd and I have not fully committed ourselves to the Feingold program.  While I keep all the kids to a strict adherence of the diet, we have sometimes indulged in things not allowed on the Feingold program. (usually on date night or other times we are away from the kids).  I also have not fully "gone Feingold" in the beauty department.  The kids use fragrance-free and dye-free shampoo, conditioner, and soap;  I have switched to dye-free but haven't been able to convince myself to ditch the fragrances.

So, yes, I would still enjoy a Pepsi here and there - not under any delusions that it was good for my health, of course.  But after having a small slice of red velvet cake at a conference and immediately getting a migraine afterwards, I began to wonder what effects these artificial colors and flavors could have on myself.  I decided to keep a food and mood journal.  I had been doing this already for our TC (target child in Feingold speak), and it had proven very helpful in identifying what foods were triggering his moods, bizarre behavior, meltdowns, insomnia, etc.  After a week of journaling what I ate and drank and recording my moods and general health afterwards, I was shocked to discover something.

Pepsi did not make me a good mom.

It seemed that I would reach for a Pepsi mid-to-late afternoon, the time of day that most stay-at-home moms know is a little more stressful.  After downing a can of Pepsi, my journal showed that I was angry, irritable, moody, and stressed out.  To put it bluntly, I was a bad mom.  I would snap at my kids and feel impatient when they didn't obey quickly enough.  I was amazed at how quickly and how fiercely my temper came out.  I was drinking the Pepsi to help calm myself during a more stressful time of day, and it was having exactly the opposite effect.

Once I realized this, it was no problem breaking up with Pepsi.  Strange that the negative effects on my teeth or my weight never seemed to impact me this way.

I don't know what it is in Pepsi that affects me that way.  I don't know if other sodas would have the same effect, but this girl's not in line to find out, if you know what I mean.