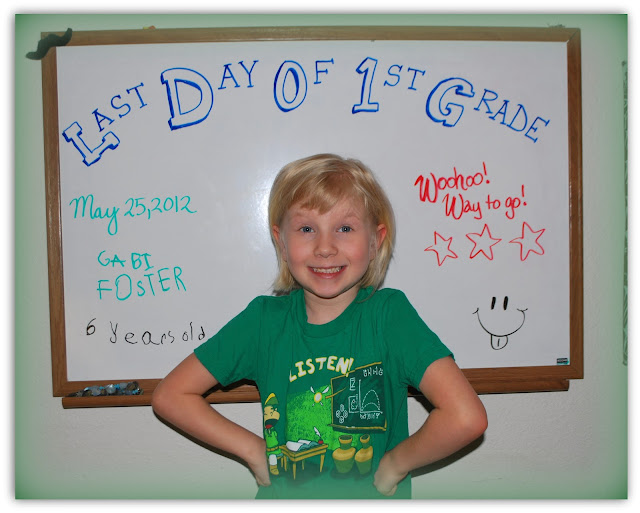 If you are thinking that the girl in the photo is looking entirely too grown-up these days, I am in complete agreement!  The Drama Queen is 6-going-on-16 some days, I'll tell you!

We started off our first year of homeschooling as a kindergartener.  I took photos of her on her first day of kindergarten, because that's what grade she was supposed to be in.

However, I had purchased first grade curriculum since it seemed a more appropriate subject level for her.  The girl flew through the curriculum with ease.  Therefore, we are considering this past year her first grade year after all.

Her favorite subject was arithmetic for sure.  She learned about money and measurements;  she memorized addition and subtraction families up to 13.  She learned how to carry when adding large numbers, but most importantly, she learned how to apply all her new math skills to real-life situations.

Her least favorite subject was handwriting.  (I love handwriting, but I am pretty sure I am in a very small minority there!)  I had decided to teach her cursive mainly and work on her manuscript on the side.  In retrospect, I think I might have skipped the whole cursive thing.  It was taxing, trying, and agonizing to say the least.  But hey!  The girl can write in cursive now.  Her manuscript letters do need some work; so I know what we will be focusing on this summer.

The best part of the year for me was watching my little reader blossom!  She started off the year faltering through her favorites like Amelia Bedelia and the Berenstain Bears;  now she eagerly devours anything readable in her sight.  Yesterday she read several pages to me from her new book about the human body, pronouncing words like immune, system, and disease with no trouble.  I know that learning her special sounds in phonics helped a great deal; but I would be remiss if I didn't mention video games as an important tool also.  If the Drama Queen had a productive (and non-whiny) day of school, oftentimes the Nerd would reward her by playing some Legend of Zelda with her in the evenings.  For any of you that may have played this game "back in the day," you will know that it involves a lot of reading the screen to find out what you have to do next.  At first, the Nerd mostly read the directives out loud as they played; now she reads them and excitedly tries to solve whatever problem Link is facing.  She adores the Legend of Zelda (hence the shirt in the picture!) and has branched out to other games as well.  Our local library allows us to borrow select titles for the Wii - I think she has benefited most educationally from the Build a Bear game and the Jump Start game.

For our first year, I mostly stuck to the curriculum (A Beka Book) that we had purchased.  Now that I have had a little experience with this, I plan on branching out, putting together a curriculum that works best for my three oldest and trying to be a little more creative with my resources.

I plan on having the kids do some review in math, reading, and writing over the summer, but for now we are on "vacation."  Of course, the Drama Queen is busy right now rounding numbers to the nearest ten on her Jump Start game...

(Just realized that it might look like this post was sponsored by the game companies I linked to.  No such luck - I just put the links up in case anyone reading this post wanted to find the games we use.)
Posted by Mrs. Frogster at 12:31 PM