So. As I mentioned in a previous post, for the Nerd's birthday he usually chooses what he wants for his birthday and then I go get it for him. This year it is apparently something Xbox-related. However, I always like to give him a little something else - usually something from ThinkGeek.com - something he would not expect that shows his wife actually pays attention when he talks on and on about his computer and gaming adventures.

This year, I didn't think of it until the day of (gulp! such a procrastinator) and after perusing the internet for ideas, I finally decided to make him a fun little case for his Iphone (or for whatever he wants to use it). I debated over favorite game and TV characters and came up with a Goomba (from Nintendo's Super Mario Bros) since it has "manly" colors and has a shape that works well with a phone case.

Want to make one too? Here's a tutorial to help you speed through the process as fast as I did (remember I made it on his birthday!) Since I was in a a bit of a hurry, there are a few changes I would make and have noted them along the way. If I were you, I would read through the tutorial first - switching steps #3 and #4 would have made things a lot easier, just sayin'. 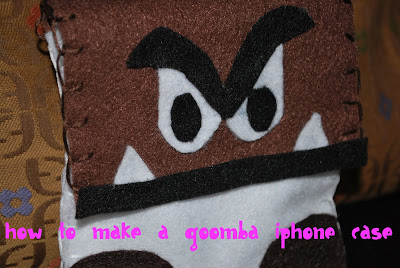 1. First gather your materials. You will need felt in these colors: dark brown, medium brown, white, and black as well as some embroidery floss to match the felt colors. You will also need some velcro for the case closure. Tools needed are an embroidery needle and a hot glue gun. 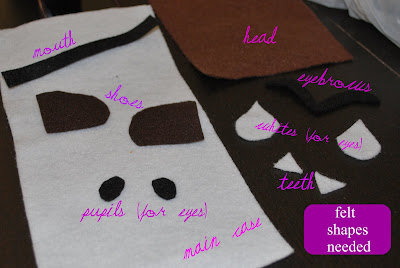 2. Now cut out all your felt shapes. For the main case, cut one white rectangle (4.5" by 10"). For the head, cut one medium brown rectangle (4.5" by 5.5") The shoes are cut from dark brown felt and measure 1.5" by 1.75" with curved edges, as shown. The mouth is cut from black felt and measures 4.5" by .5". The other pieces do not have measurements. Cut the whites of the eyes first - 2 tear-drop-shaped pieces of white felt. Next cut the pupils of the eyes from black felt - 2 oval shapes that are smaller than the whites of the eyes. Measure the tops of the whites of the eyes and cut black eyebrows slightly larger. (I made my eyebrows one piece and folded it in half before cutting to get uniform-looking eyebrows.) The teeth are cut from white felt and are just small triangles. 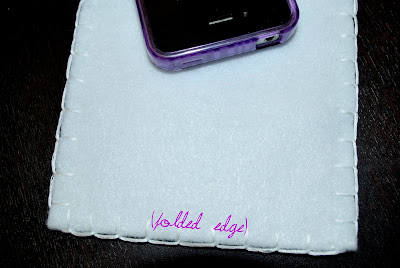 3. Fold your main case piece in half so that the folded edge measures 4.5" across. Thread your needle with all six strands of white embroidery floss and blanket-stitch around the sides and bottom (folded edge) of your case. Leave the top open. (If you need help with blanket stitching, here is a great tutorial). 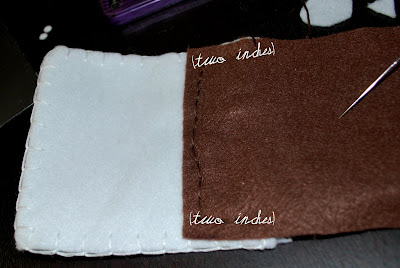 4. Now thread your needle with medium brown floss (all six strands again) and use a running stitch to stitch it to the back side of your case only. Do not stitch through both pieces of white felt. (this is why it would have been better to do this step first). Notice in the diagram that the brown piece is placed two inches down on each side before stitching. 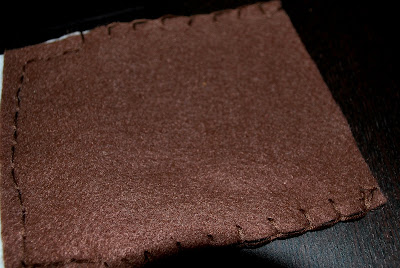 5. Now blanket-stitch each side of the case flap (the brown felt.) You do not need to stitch across the top as that will be covered by the mouth. 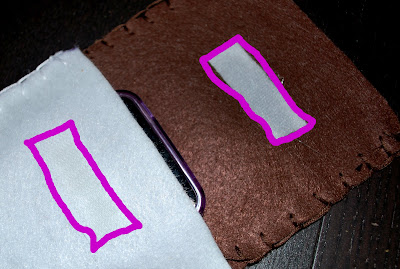 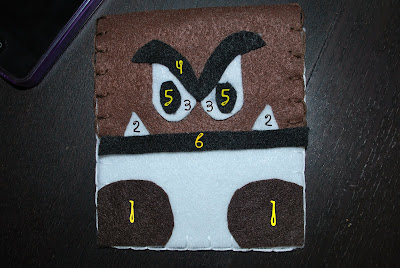 7. All facial features and shoes should then be glued on, in the order shown in this diagram. Use hot glue and make sure your glue gets close to the edges of each piece so that it will stay firmly in place. (Don't burn yourself - use tweezers to place pieces!) 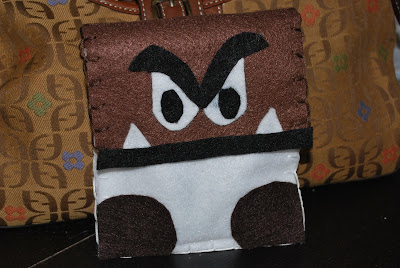 Now you have a little Goomba just ready to protect your Iphone. The measurements for the case given were for an Iphone 4, but you can certainly modify it to work for any electronic device you want. I was also thinking this little guy would make an awesome gift card holder.

I wonder what other characters would make a cute case?