Last week I mentioned in my weekly pregnancy post that I had finally completed my nursing cover. I had a few strips of fabric left over and decided to make Little Sprout a cute little flower headband for all her newborn fashion needs. I mean, how many other babies have hair accessories to match their momma's nursing cover? It turned out pretty well - so well in fact that I am pulling out some more fabrics to make her a whole set of these. And I'm thinking Big Sister and Momma wouldn't mind having their own modified versions of this flower headband.

For this fluffy flower headband, you will need: two coordinating fabric pieces (mine were just leftover strips from my nursing cover project - you won't need much!), a small piece of 1/4 " braided elastic, a sewing machine loaded with matching thread, a glue gun, a sharpie, and a soup can. 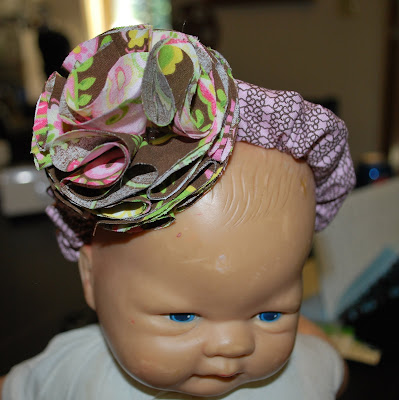 (Please excuse my model's look of disinterest. She has been around for 20+ years and has cheerfully taken all sorts of modeling abuse.) 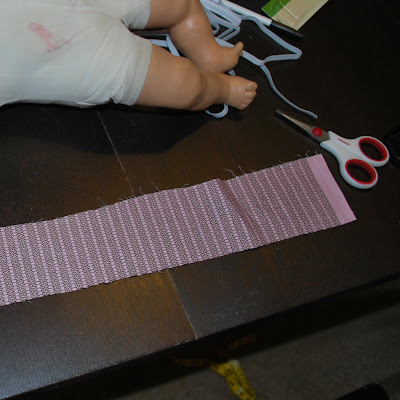 So, first you are going to make the stretchy headband. Measure your baby's head (or the head of a doll reasonably similar to a baby's head) and double that to get the length of your fabric. Then cut out a strip that long and about three inches or so wide. 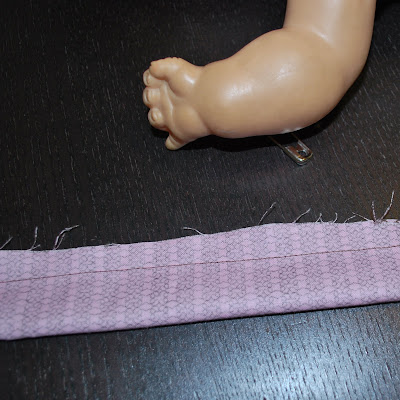 Next, fold your strip of fabric in half as shown with the wrong side out and stitch a 1/2 inch seam along the cut edges. 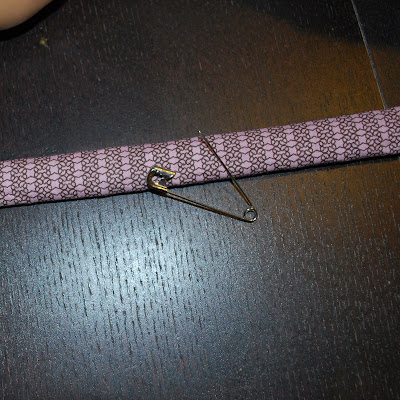 Using a safety pin, turn your tube of fabric right side out. Don't bother to press it - you will be scrunching it up soon enough. 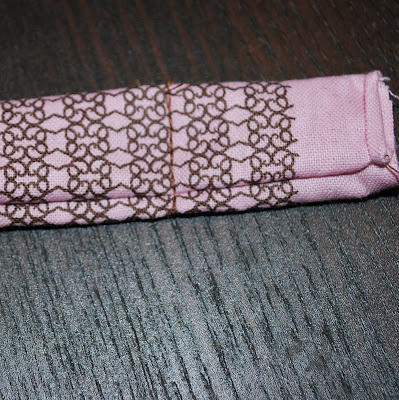 Cut a piece of elastic that is just a little less than half the length of your fabric. Attach a safety pin to one end of the elastic and begin threading through your fabric tube. When you reach the halfway point, before the other end of your elastic disappears into the tube, sew down that end of elastic as shown. 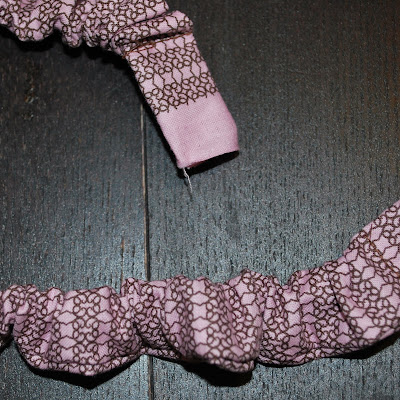 Continue working the safety pin through the rest of the fabric tube until it comes out the other end. Scrunch your fabric until you like the way it looks, and sew down that end of the elastic/fabric as well. Make sure that on both ends, you have sewn through the fabric AND the elastic, so that the elastic will stay in place. 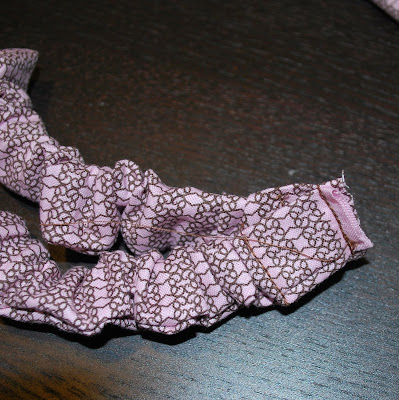 Match up the two ends of the fabric tube and sew together in a 1/2 inch seam. Trim down the fabric edges as shown. 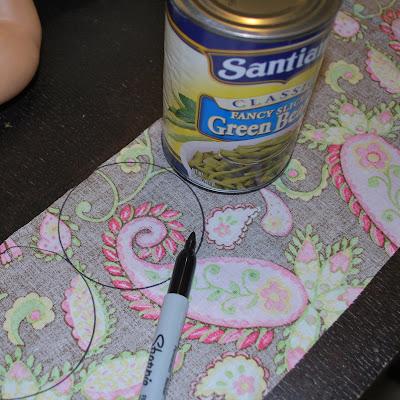 Now, you are going to start working on your flower. Using a soup can, veggie can, hair spray can, or whatever you have, trace out 17 circles on the wrong side of your contrasting fabric. The larger your circles, the larger your flower will be. Cut out all 17 circles - you don't have to be too exact here. Just make sure to cut off all black marks as they will show in the completed flower. 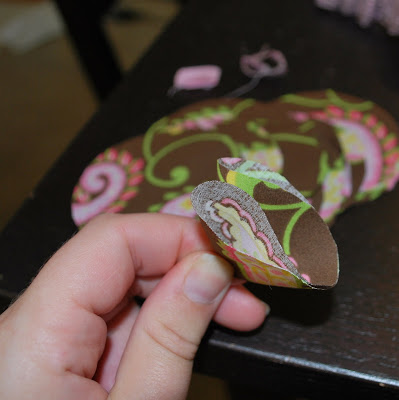 Take one circle and fold in half and then in half again, with the right side of the fabric out, as shown. 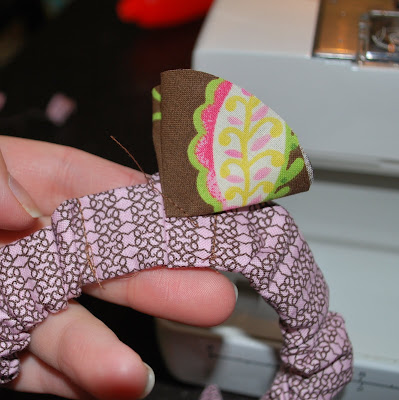 Sew that folded circle in place on the stretchy band right where you stitched the two ends of the band together as shown. Sew diagonally across the triangular point of your folded circle. 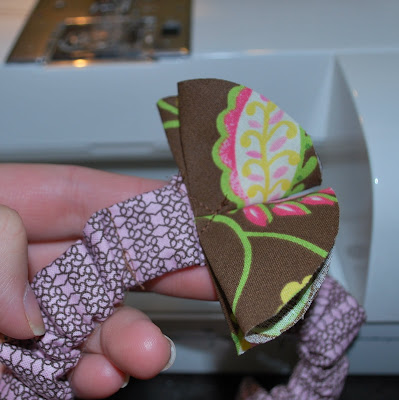 Fold another circle the same way and sew it to the headband directly underneath the first folded circle, as shown. 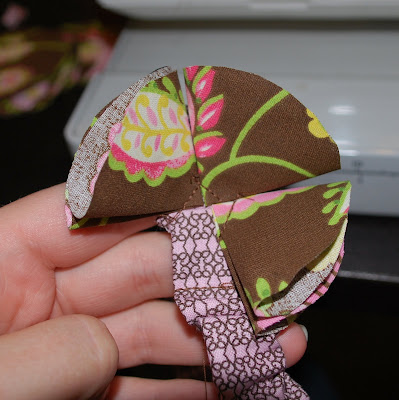 Fold a third circle and sew to the headband directly next to the second folded circle. It should look like three-fourths of a circle, as shown. 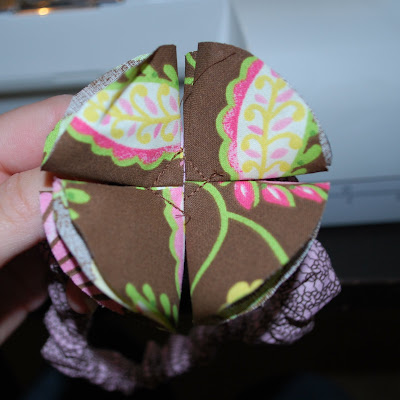 Fold a fourth circle the same way and stitch in place. Notice that your stitches make a square or diamond shape. This is the first layer of your flower. 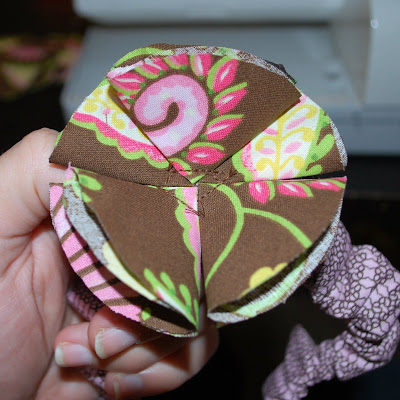 Now you will sew on the second layer of your flower in the same way. Place the first "petal" as shown in the photo above so that the petals will not be directly lying on top of each other. Continue folding circles and stitching them in place until a second layer is completed. (Four folded circles make one layer.) 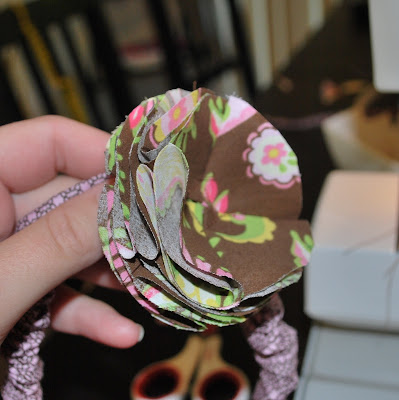 Add a third layer of petals in exactly the same manner. Your flower should look like this. 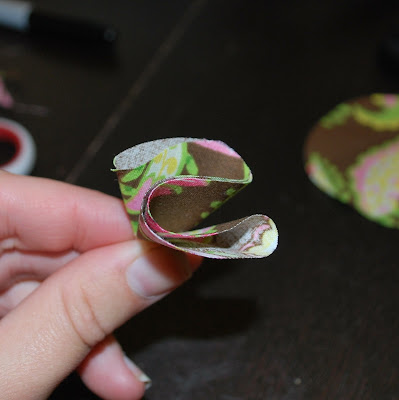 Next, take another circle and fold it in half and then fold it into thirds, as shown. 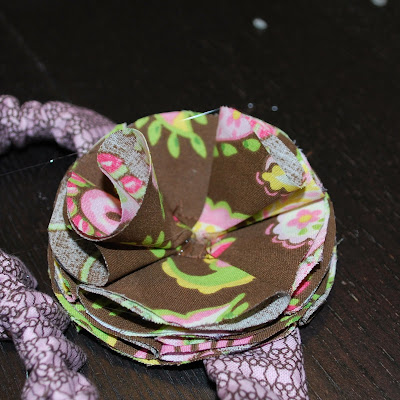 Make a dot of glue with your hot glue gun at the center of your flower and press the point of this new folded circle into the glue. (use tweezers or the tips of your scissors so you won't burn your fingers!) 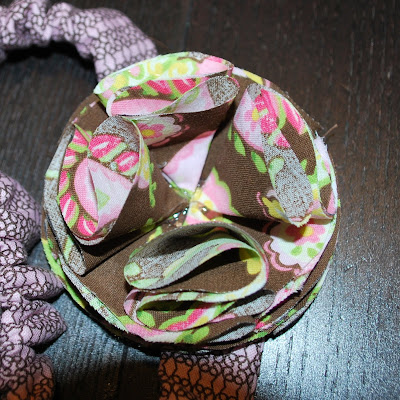 Do this three more times with the circles folded in half and then into thirds. Glue them in place with the hot glue gun. 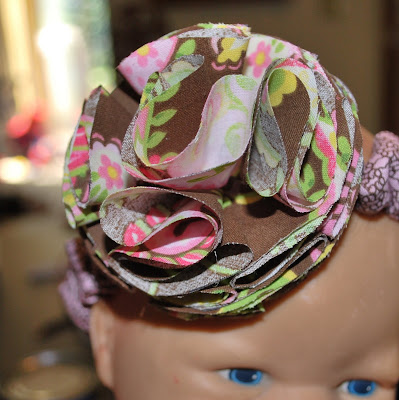 Finally, take your last circle and fold it in half and then into thirds, as you did with the previous four circles. Place a dot of hot glue in the very center of your flower and press this last folded circle firmly into place.

And there you have it! An adorable, chic hairband for the equally adorable infant in your life.

In a future post, I will show you how to modify this headband to make it suitable for an older girl and even an adult. (my headband does not have as full a flower for example, and my daughter's headband has a removable flower.) Happy creating!