Well, we finally got the snow that the meteorologists have been promising us.
For months now, nearly every week, we would turn on the TV to hear some weatherman predicting a big winter storm for the area. People would rush out to the local stores to buy milk and bread and eggs as if they were preparing for an apocalypse. I have never understood this - what, do people live day to day on food rations at home so if a snow storm were to suddenly appear they would be completely without food or drink?* Anyway, we were disappointed time and time again, foiled by sunshine or rain storms. The snowsuits we had bought the kids during the very first storm warning (back in November!) were stored in the Walmart plastic bag, tags still attached. Personally, I think the local stores made a deal with the meteorologists to announce winter storms every so often to send people into a frenzy, forcing them to run out and buy lots of stuff.
Anyway. Snow showers hit us throughout the night and into the morning, covering everything with a light blanket of snow and creating an extremely rare phrase around here - "snow day." I know my East Coast friends are giggling right now that we get a day off school just because of a little snow. :) But here in the Oregon valley, snow is so infrequent that the cities are not prepared for it when it does come. Also, we are all just a bunch of wimps when it comes to driving in snow. (Not me, of course, I grew up in PA and even roughed it for a couple of years in MA!)
So here's the wintry scene outside my kitchen window (taken without a flash): 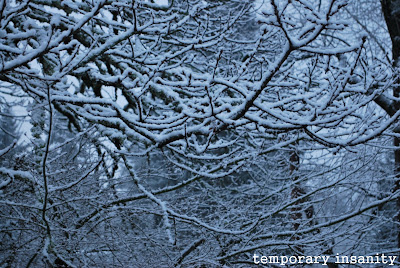 And here it is again, taken with a flash, because I couldn't decide which way was better, not having snow for so long and all. What do you think? 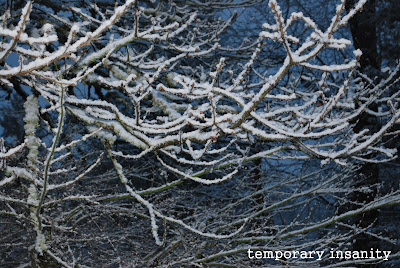 I officially heard that school was closed at 6:00 am and was excited to get back in bed and sleep in a little. But it was not to be. I had two kiddos jumping out of their pants at the sight of snow outside their bedroom windows. The other one? Well, he just wanted juice and Froot Loops. . .
Once the sweet girl I usually watch in the afternoons arrived, we got ready to go out and play. This was a more arduous task than I anticipated, especially when the Spud kept removing his mittens and hat every time I turned around. But, hey, those snowsuits were going to finally be worn: 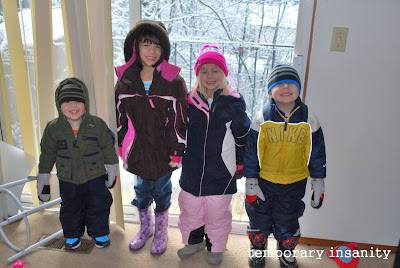 I think they lasted about an hour on our deck, shoveling the slush off with spatulas and making tracks with their toy dump trucks and bulldozers. The sun came out, but they persisted in their attempts to make the world's tiniest snowman until everything was mud and puddles. Now we are enjoying our "snow day" indoors, with Nintendo DS's and books and Hot Wheels and hot chocolate. I am seriously considering using this extra "free time" to clean out and organize the pantry.
Happy "Snow Day", everyone!
* I must confess that I made a quick run to the local grocery store on Tuesday night to get some ice cream. We were completely out, and it would have been tough to survive this winter storm without it!
Posted by Mrs. Frogster at 10:03 AM