All My Pigs in Their Pen

Every Wednesday evening, I have the privilege of spending some time with some very adorable kids. My husband and I run the PeeWee Pirate club at our church, which is a program for 3 -5 year-olds that teaches them character traits and Bible lessons. They also learn a new verse and song which they all get to perform in a church service each month. I love my PeeWees, although things can be a little hectic with nineteen little ones. And did I mention that two of the rascally crew are my own Drama Queen and Beast? 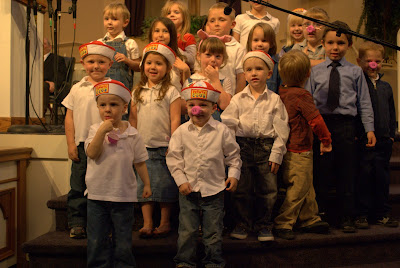 Last night, the PeeWees sang a hilarious song called "Pigs Don't Live in Houses". (hence the pig noses on some of the children!) Note the smiling blonde all the way in the back corner. Yep, that's my Drama Queen! You may also note the absence of the Beast. 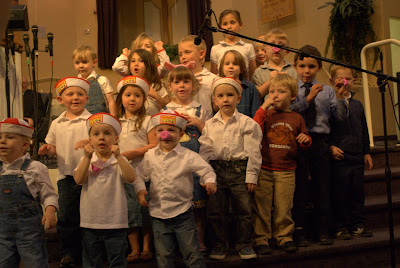 That's because Mr. Beast strutted his stuff right out on stage, turned around, and spotted his grandparents in the audience. He kept shouting "There's Grandma! There's Grandpa!" "Hi, Grandma!" until we had to take him down from the stage so he wouldn't distract from the rest of the song.
Everyone loved it of course, and kept telling me what a little ham he was. The truth is, they were all little hams! Sweet little pigs! :)