The Singing Christmas Tree.  A family Christmas tradition.  And this year, it was Gabi's first time to go.  The Singing Christmas Tree is a formal affair that takes place at the Keller Auditorium in downtown Portland.  There's something magical about all the lights, the beautiful singing, the fancy dresses...  And speaking of fancy dresses, Gabrielle had a brand-new one to wear.  A dress with tiny intricate gingerbread men and beaded Christmas trees embroidered on it.  I curled her hair and tied gorgeous burgundy ribbons in it.  As for myself, I had actually been wondering for a while what on earth I would wear to this event.  We had no money for a new dress, and as for the ones I had, well, let's just say some baby weight has been hanging around a little longer than necessary.  I finally decided on a red formal dress that I had worn for the Valentines' Banquet earlier this year.  At that time we had recently found out I was pregnant with Michael (a big surprise!) and I had found this fabulous little red dress at Motherhood Maternity.  That's right, I said "maternity."  The dress itself did not look maternity at all and so I decided to wear it to the Singing Christmas Tree.  I still had some doubts - staring in the mirror multiple times to be sure it did NOT look like a maternity dress.
Gabi and I drove downtown a little early and spent some time at the Pioneer Place Mall window shopping.  We met up with Chris at the food court where he reassured me that it did not look AT ALL like a maternity dress.  The three of us walked the festive eight blocks to the Keller Auditorium to find our seats for the grand occasion.  On our way to the balcony, I ran into a dear lady from my church.  She introduced me to her friend and then asked me, "And when is your little one due again?"  I flushed with embarrassment, the kind that spreads all the way to your toes, and stammered something about having already had the baby in August.  "I knew this looked like a maternity dress!" I spluttered to Chris after she hurried off.  "Babe, seriously, it doesn't!  She probably just forgot that you had the baby already," he calmed me.  By the time we reached our seats and other friends had told me what a great dress it was, I felt relieved and ready for the big event.
The Singing Christmas Tree was everything it should be - bright lights, gorgeous scenery, "snow" falling from the ceiling, and talented guest artists.  They announced each artist in turn, and when Katie Harmon came out, my jaw dropped.  Not because she was obviously ready to pop out a baby at any moment, but because she was wearing THE dress.  My dress!  I turned and glared at Chris.  "Don't say that it doesn't look like maternity!"  He mouthed, "I'm sorry, babe," but I could tell he was enjoying this joke that life had played on me.  My friend Rachel leaned over and whispered, "Well, at least you obviously have good taste!"
Despite the dress mishap,( I mean, who wants to wear the same dress as someone else, especially when it is maternity and you're not even pregnant), I had a great time.  Gabi squealed with delight at Santa, Frosty, and the "snow" most of all.  It makes me feel like the season of Christmas has really started! 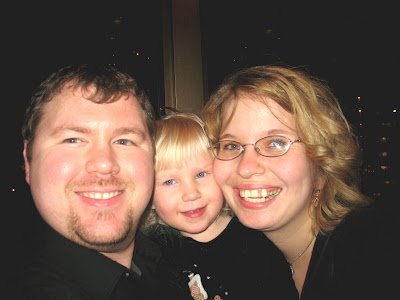