Not for the Faint-Hearted!

Well, I am gong to issue a warning about this post before I begin.  Unless you are in the midst of potty training a child or have done so in the past, you may find some of the details of this post a little disgusting, to say the least. 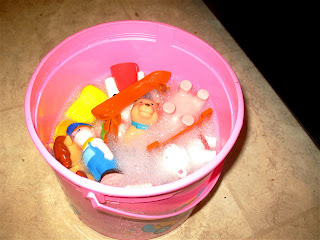 We have been potty training Gabi for quite some time now - she was pretty much "trained" back in July and then we had Michael.  Once he was born, she started insisting that she was a baby too and wanted to wear diapers again.  Good times!  But slowly we have been working on her and for the most part, she is "trained" again.  I put "trained" in quotes because who knows when it's going to fail.  Case in point:  On Sunday, Gabi had a horrific case of "the runs."  Naturally she would have this problem on a day when we were out of the house all day.  Let's just say that during the thirty minutes we were at Walmart, we visited the bathroom eight times and ended up buying an emergency pack of pull-ups.  Multiply that by the rest of the day, and it seems we spent most of the day in one public bathroom or another.  Naturally, after all that bathrooming, Gabi was not fond of using the potty any more.  On Monday, she had 7 accidents ( I just forgot, Mommy!) all of which required me to either clean a)the couch, b)the floor, c)some toys,  d)some books, e)some blankets, and in one case, all of the above.  One particular incident stands out however.  I was in the kitchen baking and both David and Michael were taking naps.  Gabi was playing quietly in the living room when I heard her saying, "I'll just dry you off, Piggy.  I can dry!"  Thinking it was all part of the play-acting, I continued in the kitchen; but when she kept talking about "drying" I thought perhaps I should check it out.
Apparently she had had a big accident on the floor and then used the "dishwater" to wash EVERY piece of their farm set!  Then, she had been in the process of drying the toys - not with a towel, but with several pieces of folded laundry that had been on the couch, including my favorite sweater.  Yuck!  Frustrated, I dumped all the toys into a plastic bucket filled with soapy water (hence the pic) and not so calmly instructed my daughter on the merits of cleaning things with actual water, not body fluids.  :0
And to think I have two more to potty train...
Posted by Mrs. Frogster at 8:14 AM