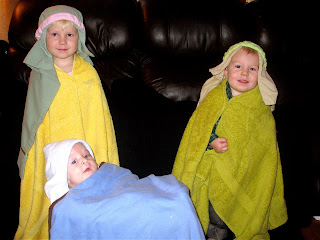 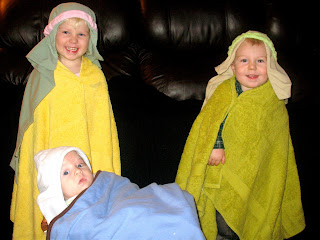 Dumping rain outside - the kind that rattles your windows and makes you feel all cozy and glad to be inside. This is Oregon in the fall - rain at least 5 days a week and lots of it!
Yesterday I decided to try to take a photo of the kids for this year's Christmas card. Apparently one of my blogging friends (here) also had the same idea. Unlike her however, we did not have "gorgeriffic" weather - it was raining as always - but my kiddies were all in a GREAT mood. So hence we began said photo shoot.
I've always had it in the back of my head that since this year I now have two boys and a girl, I would like to do a manger scene with the kids. Gabi would be a glowing Mary, David a proud Joseph, and Michael a serene baby Jesus. Naturally when the notion hit yesterday to take the photos, I was not prepared with props and such and so made do with what was available. Gabi and David were wrapped in towels and pillowcases, and Michael was wrapped in blankets. I covered the couch with a black blanket and set up a basket on top of a step stool for Michael to lie in. It was truly ghetto, but the kiddies were incredibly cute.
Now of course the challenge is to get all three kids looking at the camera and having pleasant expressions on their faces. Gabi started in with the attitude right way, and because I was desperate to only have to do this once, I bribed her with lollipops. Then she smiled for every shot - only sometimes she smiled so hard she looked somewhat demon-possessed. David did not understand the concept of getting a lollipop AFTER the shoot and whined and complained through most of the photos. Michael was faithful in giving me his "deer-in-the-headlights" look each time. Finally I remembered that the kids were really into the Diaper David books and particularly one about David going to school. They always laughed hysterically when David was tardy to class - the key word here being "tardy." So I said, "David, are you TARDY?" and during their outrageous peals of laughter I was able to get some great shots.
Now I don't have to do this for another year. I keep saying next year, I'll have professional photos done, but I am so cheap that I would rather do it myself.
Gotta go take advantage of this rainy day and get some serious housework done!
Posted by Mrs. Frogster at 9:26 AM