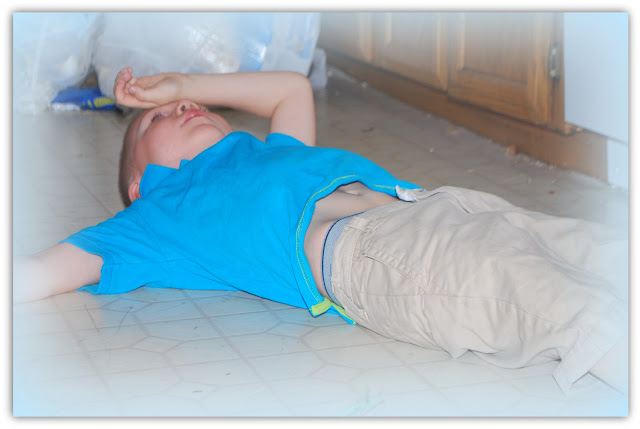 I knew that homeschooling our autistic child would be a challenge this year.  He is strong-willed and very opinionated, and I would be lying if I said I didn't consider putting him in school just so "someone else could deal with trying to teach him."  I feel very inexperienced and unqualified to teach anyone on the autism spectrum.

But I'm his mom.  I know him better than anyone else.  I can sense his mood swings, communicate with him patiently, and use his favorite things to my advantage.  Most of all, I love him like crazy and want him to learn; so you'd better believe that I'll do whatever it takes to make that happen.

I have a college degree in education.  I am trained to teach in a classroom setting.  All of that training has been thrown out the window as the Beast forces me to think outside the box.

This morning, during math class, I gave him a worksheet in which he had to read the number and then color the same number of boxes above it.  Then, he simply had to trace the number to practice writing it.

And the drama began.  "This isn't right, Momma!  The number says eight and there are ten boxes!"

This conversation went on in a similar and very repetitive manner until I finally convinced him to color in eight boxes.  He hates coloring.  I never understood why until I started teaching him at home.  The poor kid is a perfectionist and freezes up when he can't color the object perfectly.  He drew one tiny dot in the first square and stared at it, obviously frustrated.

"No, you have to do it.  It doesn't have to be perfect.  Just color eight boxes."

"I caaaaaaaan't.  This is not working, Momma!"

And he was right.  It wasn't working.  He was frustrated;  I was frustrated.  Then I thought, "What am I trying to teach him here?  To color boxes?  Or to work on his numbers?"  Did it matter how we got there, as long as we got there?  I suddenly had an idea and fished a few packs of stickers out of a drawer.

"Here, use these to fill in the squares.  Show me eight."

"I know - it's okay.  Let's just make it easier so you can focus on the numbers."

"Okay."  And he cheerfully and (dare I say it?!) eagerly put the stickers in the correct places on his worksheet.  He did indeed know how many eight was.  For that matter, he was able to easily demonstrate that he knew how many six was, and five was, and ten was.  It just took a different (and perhaps a little unconventional) path to get there.

Now don't go asking me how he did when it came time to trace the numbers.  There just isn't any fun, catchy way to go about doing that.  It's a lot of "I can't do this" and "Yes you can.  I will help you."

We are in our third week of the school year so far.  I am learning that he learns better when he lies on the floor or hangs upside down off his chair.  I am finding that he digests information in little bites so as soon as I see the frustration becoming too much, I cut the class short and return to it later.  I am seeing that he is an extremely tactile learner and am digging deep to find ways to use this information.

This is why we chose homeschooling for him - for all of my children.  I have the time and the freedom to teach each child how he best learns.

Just remind me of that when the Beast and I butt heads again tomorrow morning.

PS.  Yes, I know the kitchen floor in the picture is disgusting.  Can you guess why he had thrown himself so dramatically there?