Okay, so it took me a while to get this posted - a month after the sweet baby girl was born, in fact. But here it is - the story of the arrival of baby number four to our family. 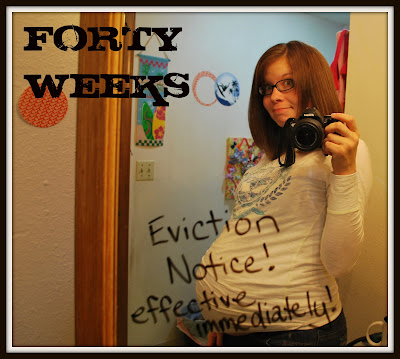 When my estimated due date came and went, I posted this picture on Facebook. I was so ready to have that baby! The nights were miserable with painful Braxton Hicks contractions, and the days were endless. I had not been able to make any firm commitments to attend any of the various Christmas functions we had been invited to since we had no idea when Little Sprout finally would make her appearance. The day after my due date, I attended a Ladies' Christmas Ornament Exchange Party for my church and stopped counting how many people asked, "Oh so you haven't had that baby yet?"
On Friday evening (December 9), after doing several laps at the mall and Target and only ending up with swollen ankles and an aching back, I saw online that there was going to be a lunar eclipse in the early morning. Not only that, but a full moon was scheduled for that Saturday night. I'm by no means superstitious, but both of my boys had been born during a full moon - so I was hopeful. Unfortunately, it was entirely too foggy in our area to view the lunar eclipse that morning. I had even set my alarm for 4:00 am to see it! That morning, I could barely move because I was experiencing some intense lower back pain. I had had this pain off and on during the pregnancy. I was bummed because I wanted the pain to at least be productive contractions! We decided to go out with the kids for a little while, but I was exhausted and hurting. The back spasms kept coming and I just wanted to go home and sleep. Our Sunday School class had a Christmas party scheduled for that evening. We had not planned on going because we thought Little Sprout would have arrived by then. I didn't really feel like going but thought it might be distracting and help keep my mind off the whole "when is this baby going to come?"
While dropping the kids off at childcare before heading to the party, the back spasms started getting much more intense. I could barely breathe when they came, nearly doubling me over with pain. A friend suggested that I might be in labor, but since I had never experienced back labor with my other babies, I was reluctant to think this might be true. I was also really tired of false labor! At the party, everyone was merrily eating and talking. I could barely take a bite before I would feel that "stabbed in the back" pain, and I would have to sit there and force myself to breathe through it. The Nerd convinced me to start timing the back spasms, in case it really was labor. They started becoming very regular, about ten minutes apart and lasting forty seconds to a minute. I still insisted on staying at the party for the gift exchange :) At this point, I was having trouble focusing on anyone or anything. We left the party and went to pick up the kids. Although I was against it, the Nerd called the hospital to let them know I was in labor. By this time, the contractions were 8 minutes apart, but I was sure the nurse was just going to tell me to wait it out until they got closer together before coming in to the hospital. However, she told us to come in right away.
My in-laws came and got the kids, and we headed in to the hospital. While walking to the labor and delivery floor, I had to stop every couple of minutes and work through a contraction. I remember thinking that I had never experienced such painful contractions in either of my previous deliveries. I looked out the window while we were checking in and noticed the full moon. It wasn't long before the nurses had me settled in a room and hooked up to the monitors and IV. The Nerd started setting up his cot and letting people know I was in labor. We knew from previous babies that my labors were long, so there was no need to rush things. The midwife came in to check my cervix and announced, to my great shock, that I was 8 cm dilated and would be delivering the baby within the next couple of hours! Everything started happening so quickly at that point. I asked if I could still get an epidural to help with the back pain. The anesthesiologist told me that he could give me an epidural but that it wouldn't be able to take full effect since I was so close to delivering. It took him two tries (ouch!) but he finally got it in. At that point, any relief from the back pain was welcome! Apparently Little Sprout was positioned right up against my tailbone and the pressure was causing the back spasms. At midnight, I was ready to push, and after 45 tiring minutes of pushing, this adorable little girl came into our lives and stole our hearts instantly: 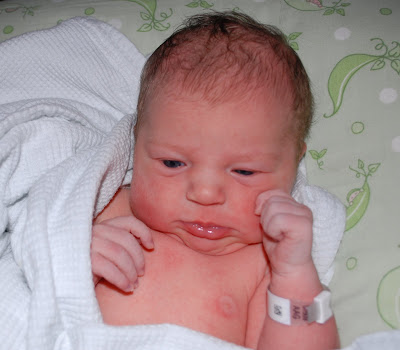 I wasn't able to hold her right away. Her lungs had a lot of fluid in them; so she had to lay flat in the warm bassinet for a while in order for her muscles not to work so hard to breathe. But oh! When they finally placed little Hosanna Joy in my arms, my heart swelled with happiness as I looked at my brand-new daughter. She looked just like a girly version of our Spud. Her head of dark hair amazed and delighted us. 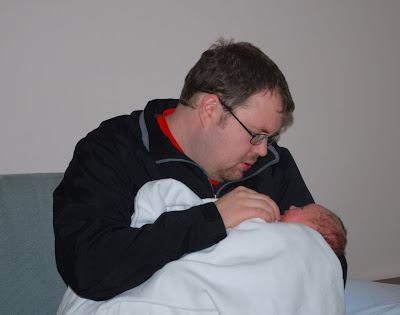 The Nerd was instantly smitten - another Daddy's girl has joined our family! 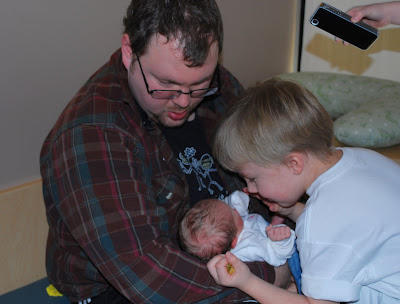 When the siblings were able to come visit later that morning, the Beast would not leave her side. The others got distracted by flashing buttons and curtains and nurses that gave them ice cream. The Beast held his little sister with great pride and showered her with kisses. 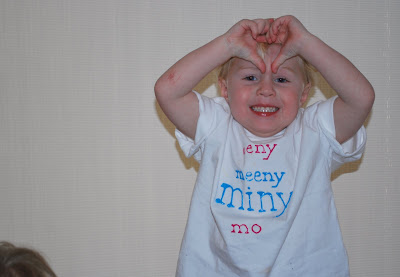 The Spud was pretty excited too! Look at that face! 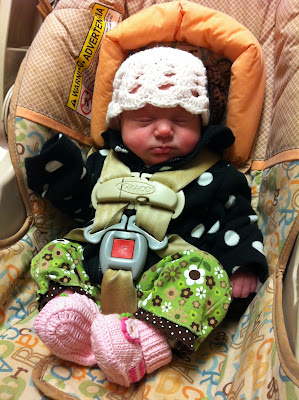 We had an amazing stay at the hospital - our nurses were wonderful and everything went so well. But we were more than ready to take our newest addition home that Tuesday morning. She fits into our family like a glove - now just a month later and none of us can imagine our family without her.
Welcome, Hosanna Joy! Our family was not complete until you arrived, and now our lives are even more full of joy. :)
Posted by Mrs. Frogster at 11:38 AM