We made Angry Bird cake pops for the Drama Queen's sixth birthday. They were my first attempt at cake pops, but I thought I would share how I decorated them for any Angry Birds fans that wanted to make their own. I had plans to make all the different birds as well as the pigs, but as the night wore on, it became clear that that wasn't a realistic goal. So I settled on making the yellow bird, the red bird, and a pig.
First, I made the cake balls. It's super easy - you just make a cake mix in a 9x13 pan and then crumble it into fine crumbs when it has cooled. Then take a can of frosting (chocolate fudge for us!) and mix about 3/4 of it into the cake crumbs. Combine it well and make sure to not add too much frosting, or the mixture will be too soft. Then mold the mixture into nice round balls for the pigs and red birds. Mold some of the mixture into flattened triangles for the yellow birds. Put all of your balls and triangles on a parchment paper covered baking sheet, cover tightly with plastic wrap, and refrigerate for several hours or freeze for fifteen minutes. You don't want them in the freezer for too long or they will be too cold, causing the candy coating to firm too quickly. 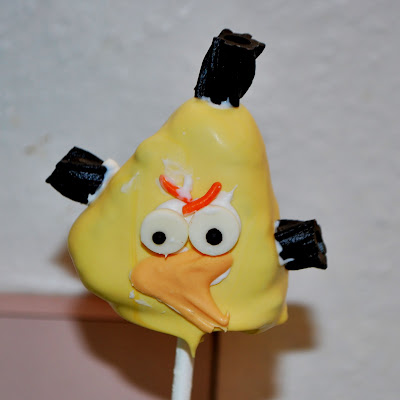 For the yellow bird, I melted vanilla candy coating and tinted it with yellow candy coloring. I inserted a lollipop stick in the coating and then into the base of the triangle cake ball. I dipped the triangle ball into the coating completely and gently tapped off the excess. The eyes were made from vanilla chips with the tips cut off to make them flat. The eyebrows were simply orange sprinkles, and the hair and wings were cut pieces of black licorice. I made the beak with melted orange coating on parchment paper. All decorations were attached with more melted candy coating used as "glue", and the pupils on the eyes were done with black decorator gel. 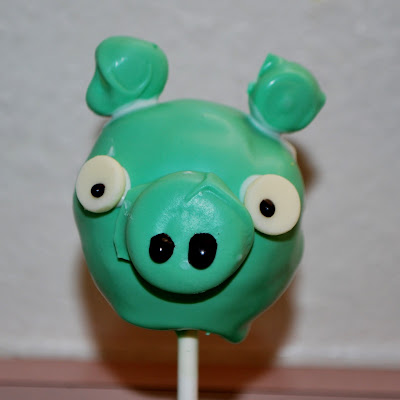 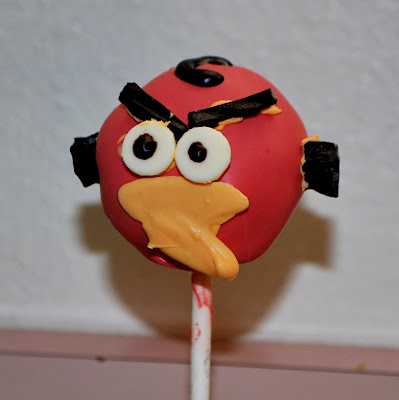 The red bird was dipped in red candy melts and had a beak made just like the yellow bird. His eyes were the same as the pig and yellow bird, but his eyebrows were made from cut pieces of black licorice as well as his wings.
I ended up making six of each character, and my daughter (and family) loved them. Be warned that they do take quite a bit of time to make. Since candy coating does not stay fluid for long and tends to firm up pretty quickly, you do have to have time to work uninterrupted. Unfortunately I had a very cranky baby that night and tried to both decorate Angry Birds pops and soothe the poor baby. (picture me rocking her in her car seat with one foot and balancing a bottle in her mouth while trying to precariously attach a sprinkle eyebrow at the same time. yeah. not so fun.)
Posted by Mrs. Frogster at 10:59 PM